Simplified Wave Analysis. Overview of EUR / USD for the week of March 11

On the weekly scale of the main euro pair chart from the beginning of last year, the bearish wave dominates. The model is not complete. The preliminary target zone is more than 5 figures below the current level.

From November, the price of the pair moves up, correcting the last trend section of the main wave. The first phase is completed in the structure; the middle part of the wave is nearing completion. The price has reached the upper boundary of the support zone. Beginning 2 days ago, the price rise claims to start the reversal design. 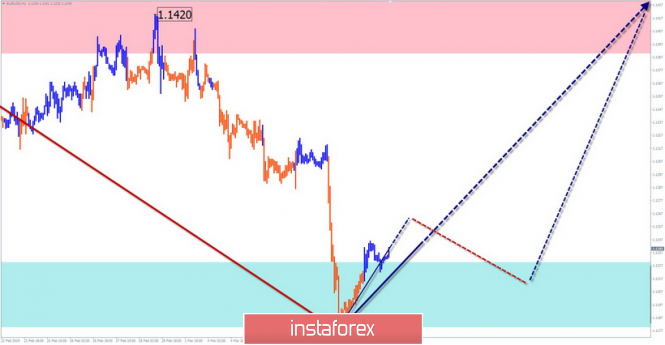 The preparation of the instrument for a course change is almost over. The period of price decline may be replaced by the growth phase already this week. The turnaround time often correlates with the outputs of the economic data block. Until the end of the month, a "bullish" attitude of transactions is recommended.

The material has been provided by InstaForex Company - www.instaforex.com
Simplified Wave Analysis. Overview of EUR / USD for the week of March 11