Simplified Wave Analysis. Overview of USD / CAD for the week of March 12

The main direction of the price movement from September 2017 is given by the ascending wave. By the end of last year, the price reached the bottom of the wide potential reversal zone.

The bearish wave from December 28 will take the place of correction in a larger model. Since the beginning of February, a correction has developed in the wave, which has reached the minimum level of completion at the time of analysis. Signal reversal is not observed, so further elongation up cannot be excluded. 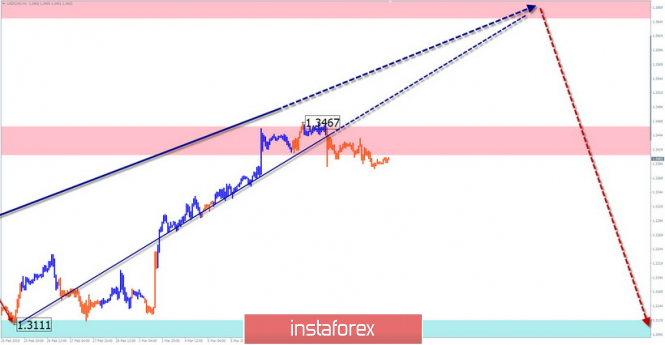 A temporary price rise is developing on the chart, which at any time can be replaced by a return to price reduction. Purchasing is risky. It is recommended to wait for the signals for the completion of the current rise and look for signals to sell the pair.

The material has been provided by InstaForex Company - www.instaforex.com
Simplified Wave Analysis. Overview of USD / CAD for the week of March 12