Simplified wave analysis. Overview of USD / CAD for the week of March 5

Over the past year and a half, the pair has steadily moved to the "north" of the chart. By the end of last year, the price reached the lower boundary of the powerful reversal zone, which caused the beginning of the oncoming wave.

The direction of the short-term trend is set by the bear wave design of December 28. The entire past month in its structure formed the correctional part (B). The rise is nearing completion. 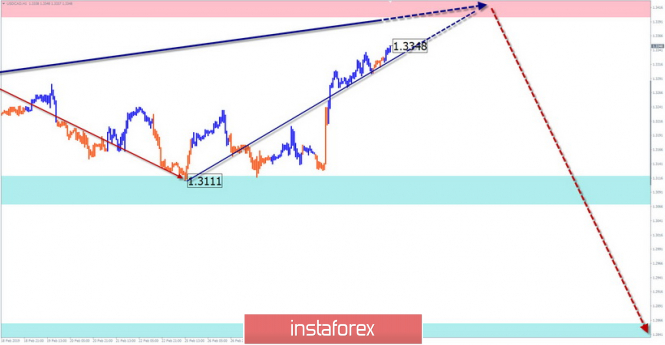 After a flat period, the price of the pair is waiting for a new round of decline. A preliminary calculation allows you to expect up to 5 price patterns down. Supporters of the international trade style are advised to track the signals of the sale of a major.

The material has been provided by InstaForex Company - www.instaforex.com
Simplified wave analysis. Overview of USD / CAD for the week of March 5