Simplified Wave Analysis. Overview of EUR / GBP for the week of March 12

The last unfinished wave model of the weekly bear scale is starting from August 2017. At the end of last year, the last part started (C).

In the bearish wave of December 10, the middle part of the structure (B) ended yesterday, having the form of a shifting plane. The decline area that started further has a high reversal potential. After the upcoming short-term rollback, it will give rise to a new round of the main wave. 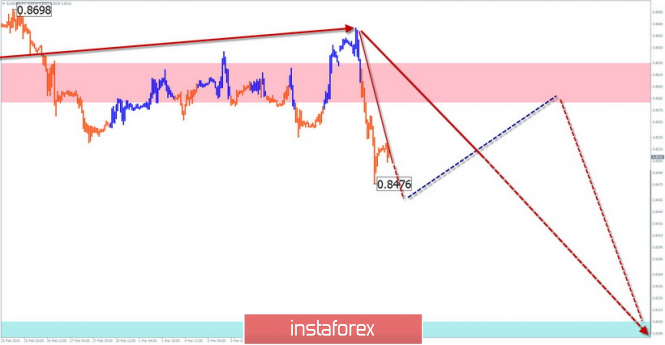 The flat part of a difficult correction, in which the price was in the entire past month, has been completed. Traders at the ends of the counter are encouraged to start tracking reversal signals to search for entry into short transactions.

The material has been provided by InstaForex Company - www.instaforex.com
Simplified Wave Analysis. Overview of EUR / GBP for the week of March 12