Simplified Wave Analysis. Overview of EUR / JPY for the week of March 8

From mid-2016, price fluctuations of the pair are determined by the rising wave algorithm. The upward movement of the cross, which started at the beginning of the current year, completed the correctional phase of the trend wave, starting the next stage.

The bullish wave of January 3 develops as an impulse. Over the past week, the price of the pair has decreased, completing the hidden correction formed in February. The price has reached strong support, but the reversal signals on the chart have not yet been observed. 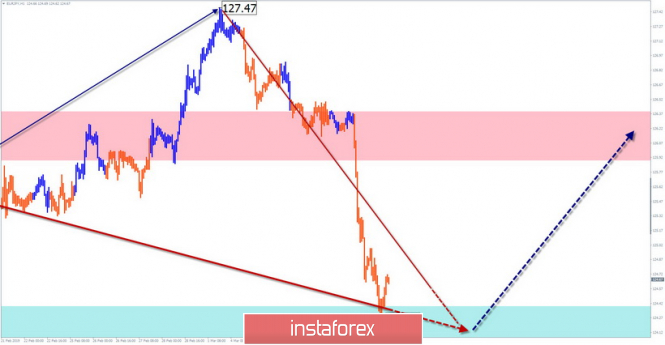 The potential reduction of the pair is close to exhaustion. This week, within the framework of settlement support, a reversal and the beginning of a price rise are expected. Traders are advised to track the buy signals of the instrument.

The material has been provided by InstaForex Company - www.instaforex.com
Simplified Wave Analysis. Overview of EUR / JPY for the week of March 8