Simplified Wave Analysis. Overview of #USDX (US dollar index) for the week of March 11

The rising wave dominating from the beginning of last year is developing according to the impulse scenario. Since the beginning of autumn, the last section has been developed in it, in which the first parts (A + B) have been completed.

The bullish wave of January 10 achieved strong resistance. In recent days, downward movement with strong reversal potential develops, which indicates the beginning of the correction. 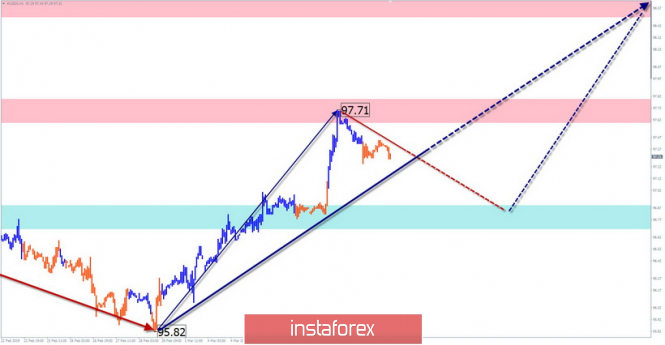 In the coming days, the dollar will mainly move in the lateral plane, to the lower border of the flat range. Further change is expected in the course and re-growth rate. Traders can use the described sequence of the motion algorithm, first making short-term purchases and then looking for signals to sell national currencies in the main pairs.

The material has been provided by InstaForex Company - www.instaforex.com
Simplified Wave Analysis. Overview of #USDX (US dollar index) for the week of March 11