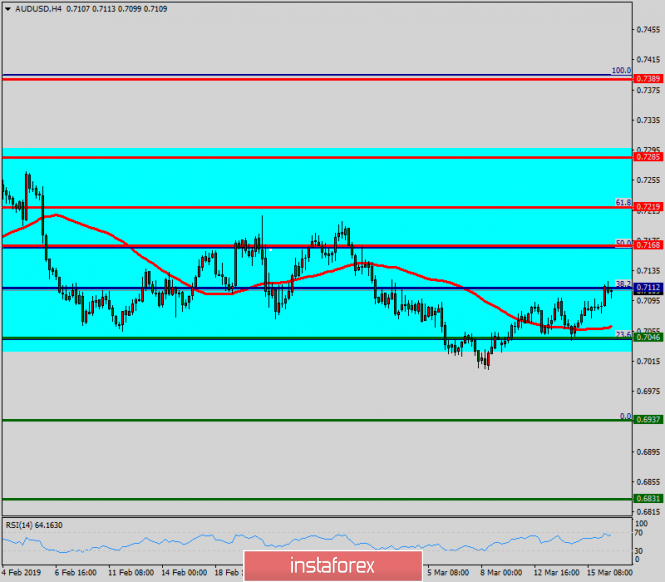 Overview: The AUD/USD pair is set above strong support at the level of 0.7046 which coincides with the 23.6% Fibonacci retracement level and 0.7168. This support has been rejected four times confirming the uptrend. Hence, the major support is seen at the level of 0.7046, because the trend is still showing strength above it. Accordingly, the pair is still in the uptrend in the area of 0.7046 and 0.7168. The AUD/USD pair is trading in the bullish trend from the last support line of 0.7112 towards the first resistance level of 0.7168 in order to test it. This is confirmed by the RSI indicator signaling that we are still in the bullish trending market. Now, the pair is likely to begin an ascending movement to the point of 0.7168 and further to the level of 0.7290. The level of 0.7389 will act as the major resistance and the double top is already set at the point of 0.7389. At the same time, if there is a breakout at the support levels of 0.7112 and 0.7046, this scenario may be invalidated. Overall, however, we still prefer the bullish scenario.The material has been provided by InstaForex Company - www.instaforex.com
2019 Technical analysis of AUD/USD for March 18

Gold has been trading downwards in past few sessions. The price tested the level of $1.270.80. According to the H4 time-frame, we found that there is the breakout of the 4-month long head and shoulders pattern in the background, which is sign that downward price is expected. Also, the rounding top formation is in the background together with the complex head and shoulders, which adds even more power on the downside. The key support at the price of $1.281.00 was broken and there is no significant support until $1.211.00 and $1.196.50. Our recommendation: We sold Gold from $1.275.70 and we did put targets at $1.211.00 and $1.196.50. Protective stop is placed at $1.312.00. The material has been provided by InstaForex Company - www.instaforex.com