The dollar made a comeback

The US dollar in late March made the seemingly impossible possible. It grew despite an increase in the probability of weakening the Fed's monetary policy easing in 2019 to 75%, despite disappointing data on US GDP for the fourth quarter (+ 2.2%), despite progress in the negotiations between Washington and Beijing, about which Finance Minister Steven Mnuchin spoke. Neither the economic slowdown nor the "pigeon" rhetoric of FOMC representatives could stop the "bears" on EUR/USD, which managed to storm the lower limit of the medium-term consolidation range of 1.125-1.15. In early March, in a similar situation, the case ended with a false breakdown. Will the be a double "two" now?

After the Central Bank lowered its forecast for US GDP in March from 2.3% to 2.1% in March and stopped expecting a rate hike in the current year, the dollar theoretically had to come under pressure. Indeed, if the normalization cycle is complete, and the inversion of the yield curve signals a recession with a time lag of 12-18 months, it would be nice to get rid of the toxic currency. Moreover, the derivatives market, which is counting on tightening monetary policy in December, openly spoke about monetary expansion in March. 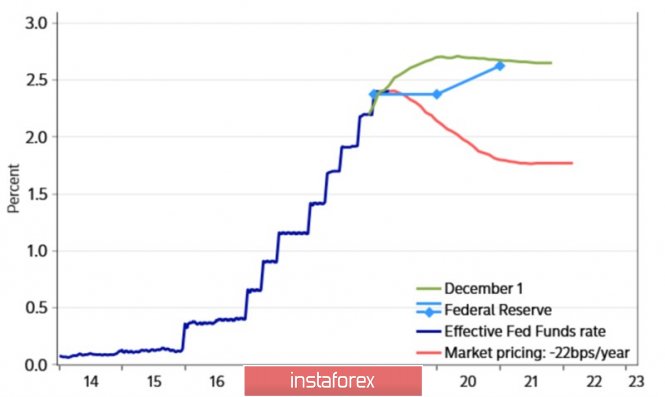 A prolonged pause in the process of normalization or its completion with growing risks of a rate reduction led to a fall in the yield on 10-year Treasury bonds to a 16-month bottom. The attractiveness of US-issued securities is declining, which theoretically should lead to capital outflows and a weaker US dollar. In practice, before you get rid of the currency, it needs to be replaced by something in the investment portfolio.

A couple of weeks ago, the euro featured as the best option. Indeed, the end of trade wars is a positive signal for the export-oriented economy of the eurozone. Its V-shaped recovery was supposed to help the "bulls" on EUR/USD to find the bottom and go to the counterattack. Alas, disappointing statistics on the economic confidence of the eurozone, German inflation, and business activity suggest that Germany is still far from rising from its knees.

ow by more than 0.2% q / q and core inflation - to go far from the level of 1%. They are scared to look at the negative effects of using negative interest rates for the banking system and are ready to use LTRO and other tools to throw a lifeline to financial institutions of the currency bloc. Rumors about the introduction of differentiated interest rates into practice, which allow commercial banks not to pay for the resources placed on the accounts of the regulator, have dealt another blow to the bulls positions on EUR / USD.

Technically for the euro buyers, nothing is lost. If they manage to cling to support at $ 1.125 and at $ 1.1185 (61.8% from the last long-term uptrend) and continue consolidation, the risks of restoring the bull trend and realizing the "Wolfe Wave" pattern will remain. And only a confident breakthrough of $ 1.118-1.1185 will allow the bears to count on the continuation of the southern campaign.

The material has been provided by InstaForex Company - www.instaforex.com
The dollar made a comeback