The flow of negativity may again collapse sterling

The situation in the foreign exchange markets remains controversial. It balances around the already annoying topics - the US-China trade negotiation process, Brexit, as well as the Fed's act of stopping the process of raising interest rates on a wave of stable signals and the risks of a slowdown in the American economy. As we have repeatedly pointed out earlier, it is the extreme degree of uncertainty around the prospects for these phenomena, as well as the fact that the growth of Chinese and European economies has slowed down. It produces high volatility and sharp nerve movements in the first place currency pairs with the US dollar.

So yesterday, on Monday, after a fairly noticeable strengthening of the dollar on Friday, there came huge pressure. There are no visible new reasons for this. Assessing the overall dynamics, we can say that market participants are "swinging", buying or selling a dollar, but at the same time they strictly adhere to the ranges established by the end of last year.

On Monday, the British pound most notably distinguished itself, which rose sharply on the message that British Prime Minister T. May was still going to Strasbourg again to discuss the topic of Brexit. Having no clear and clear idea of how this whole tragic comedy will end around the exit of Britain from the European Union. Large market players were using a high degree of tension, and vigorously were selling sterling. However, on the contrary, they would buy it.

The prime minister's next trip caused a wave of pound purchases, which he added against all currencies traded against him. Of course, in their trading decisions, investors proceed from common sense, which is based on the fact that the local British elite will not cut the branch on which they sit; and therefore will do everything to save the situation. And this is absolutely true. However, as the events take place around the emergence of Brexit and the further transformation of this situation have shown, the logic of the ruling elite is clearly not enough. In the political fit of fighting for a place in the sun, the elite are ready to really cut the branch on which it has been sitting. In fact, these were observed since 2016 ever since the referendum.

The government has already started playing to such an extent that would want them to sit on two chairs - to leave the EU, and t the same time, the decision to retain all the benefits and preferences of a participant in this union. It can simply fall between these two "chairs". We would not be surprised if the negotiation process between May and the EU representatives brings nothing new today. More so, the sterling collapses again on this wave, which leads it to rush to the starting point of its growth on Monday.

We doubt that there will be any heavy agreements, but the result of the next Brexit vote in parliament against this background may lead to a drop in sterling in the market. A pair of GBPUSD may also go down under the pressure of the publication of consumer inflation data in the US in case of presenting its growth in monthly terms. This would be a good reason for large speculators to start selling sterling again.

EURUSD is trading above 1.1250. If the pair drops below this mark in the wake of the next failure of Mei's voyage to Strasbourg and in the wake of a vote in parliament, there is a possibility that the price will drop to 1.1175.

GBPUSD is also for the same reasons in which EURUSD may turn down. Its decline below the level of 1.3180 can lead to its fall to 1.2960. 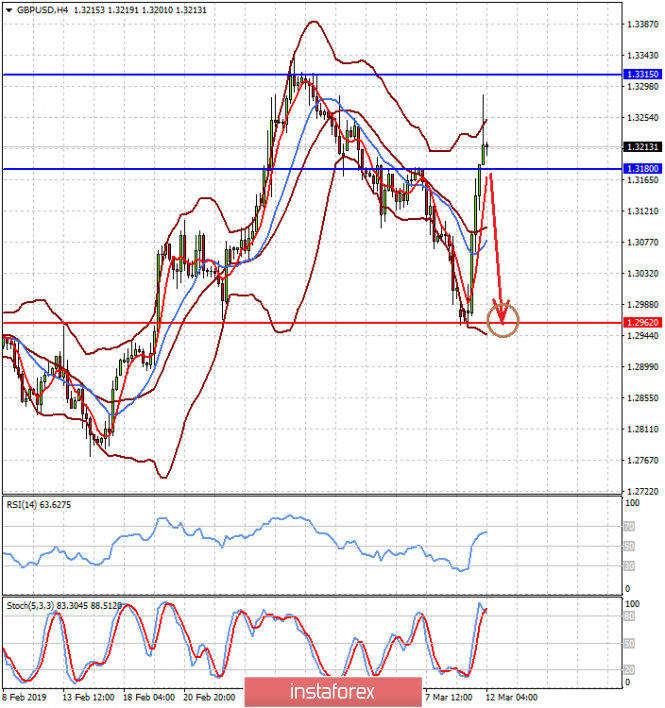 The material has been provided by InstaForex Company - www.instaforex.com
The flow of negativity may again collapse sterling