The growth in demand for liquidity supported the dollar

Markets were trading higher on Thursday amid a dovish change in the Fed's policy, however, the noticeable deterioration in the prospects for US economic growth until the end of 2019 will hold back the strengthening of the dollar in the coming months.

The eurozone looks fairly confident against the background of the Federal Reserve's declining forecasts, this confidence is based both on the recovery of business activity that began after the failure of 2018 and on quite good data on household spending, which indicate an increase in private consumption and steady domestic demand.

Today, the euro continues to be a favorite against the dollar, a return to the boundary of the channel that was attacked the day before is technically justified, there is not much to further reduce the grounds, the euro will try to return to the zone of 1.1420/30 with an eye to attack 1.1443.

At the end of its meeting on Thursday, the Bank of England kept, as expected, the monetary policy unchanged. All 9 members of the Cabinet voted unanimously for the preservation of the current rate level of 0.75%, since amid the ongoing situation of uncertainty regarding Brexit, one should not expect any steps from the Bank of England to change the status quo.

The Bank of England recognizes that the UK's exit from the EU without a deal will strike a blow to the country's economy, resulting in a further investment outcome and a deterioration in the labor market. In its study, audit company EY concluded that the volume of investments that left Great Britain, exceeded a trillion pounds, and the process continues to develop. 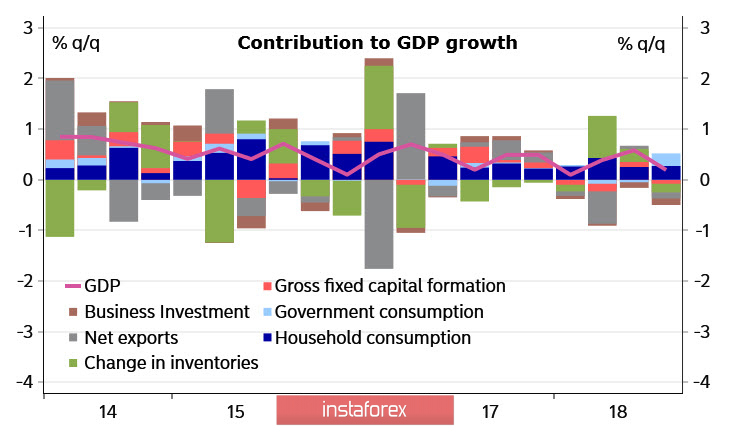 EU leaders are also tough. Ahead of the beginning of the EU summit on Thursday, the head of the European Commission, Jean-Claude Juncker, said that if the agreement is not approved in Parliament, then another summit will have to be convened, and the matter can no longer be delayed. Theresa May requested a postponement until June 30, but most EU leaders want to resolve the issue more quickly and exclude the UK from participating in the European Parliament elections on May 23-26. May's attempt to bargain at least for some kind of indulgence in order to get an opportunity to conduct a deal through Parliament nevertheless suffers an expected collapse, and the probability of leaving with its head held high, but without an agreement at all, is growing.

Leaving without a deal would mean a loss of unrestricted access to the EU market for Britain, and they will have to switch to WTO conditions, that is, input tariffs will increase significantly, which will reduce the profitability of the business and speed up the outcome of capital.

Thus, the reprieve for the pound is clearly temporary. The period of uncertainty will not last long; the Bank of England may be able to raise the rate only after prospects for the labor market and GDP growth become clear, which will not happen until Brexit gets real content. In these conditions, the pound will unlikely be able to resume growth, the prospect of a decline to the support zone of 1.2960/65 is more likely with high chances to update the local low.

The material has been provided by InstaForex Company - www.instaforex.com
The growth in demand for liquidity supported the dollar