The Euro / Dollar currency pair for the last trading day showed a low volatility of 42 points, as a result, it hovered near the level of 1.1300. From the point of view of technical analysis, we have a pullback with price fixing higher than the level of 1.1300. However, after that, the process of deceleration started, forming a cluster near the level of 1.1300. Information and news background continues to focus on the "divorce" process. This time we saw a number of rather interesting actions. The British Parliament fully removed Prime Minister Theresa May from any action and sat down to control the process, where the House of Commons spoke in favor of holding a series of ballots on various alternatives to the draft agreement on Brexit conditions. The amendment does not specify exactly which alternatives will be offered to deputies, who should be entitled this Wednesday to independently determine the agenda of the parliament in order to consider various proposals concerning the situation around Brexit. We are left with wondering about what kind of voting options are waiting for us. So this is the way out without a deal, the second referendum, the cancellation of Brexit. At the same time, the European Union, represented by the European Commission, was seriously preparing for a hard exit: "If the Agreement on withdrawal is not ratified by Friday, March 29, the" no deal "scenario will occur on April 12. The EU has prepared for this scenario. Now it is important that everyone is ready and aware of the practical consequences of the "no transaction" scenario, the EC said. Speculators, in turn, are preparing for the upcoming rally. In terms of the economic calendar, we only have statistics at the start of new construction in the United States, where there is a strong decline from 18.6% to -28.3% (February).

Analyzing the current trading schedule, we see a slowdown in the framework of 1.1300 / 1.1330. It is likely to preserve uncertainty regarding the information background, where traders occupy a waiting position, but at the same time monitor clear price fixing beyond the estimated cluster. 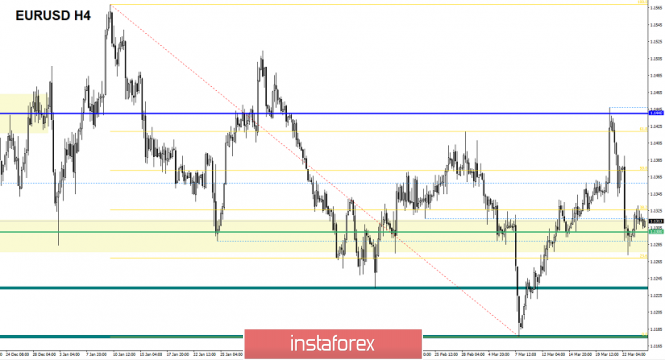 - We consider buying positions in case of a clear price fixing higher than 1.1330.

- We consider selling positions in case of price fixing lower than 1.1280.

Analyzing a different sector of timeframes (TF ), we see that in the short, intraday and medium term there is an upward interest. It should be understood that in the informational background, a cluster of indicators on smaller TFs can vary arbitrarily.

(March 26, was based on the time of publication of the article)

The current time volatility is 17 points. It is likely to assume that in the case of any statements from the information background, the volatility may increase.

The material has been provided by InstaForex Company - www.instaforex.com
Trading recommendations for the EURUSD currency pair - placement of trading orders (March 26)