The euro/dollar currency pair for the last trading day showed low volatility of 51 points, but this is enough to continue forming a downward move. From the point of view of technical analysis, we see that the quotation is kept on the side of the bears, where it reached the lower limit of the 1.1300 / 1.1320 range without too much difficulty. As a result, a stagnation is formed. Information and news was quite interesting in Europe. An important indicator was published. The volume of retail sales grew from 0.3% to 2.2%. This news, after all, had to react positively to the euro, but the result was a banal stagnation. In the second half of the day, data on new home sales in the United States is released, where they initially had a forecast of decline from 658K to 600K; however, as a result, the previous figure was revised and received an increase from 599K to 621K. The same news at the time won back on the side of the market which strengthened the dollar. In return, we have reached the value of 1.1300. The absurdity lies in the fact that all experts were inclined to think that such positive data for Europe should have stimulated the growth of the euro, but this did not happen. Today, in terms of the economic calendar, we have data on the States regarding the change in the number of people employed in the non-agricultural sector from ADP in February, where they expect a decline from 213K to 189K.

Analyzing the current trading chart, we see how the quotation forms a clear deceleration at the level of 1.1300, which underestimates low volatility. It is likely to assume a small expansion of the amplitude of the current oscillation of 1.1290 / 1.1315, but then we are waiting for the breakdown of the boundaries. Among experts, a logical rebound from this level is extremely being discussed. However, there is no need to hurry because we still have short positions in the market. 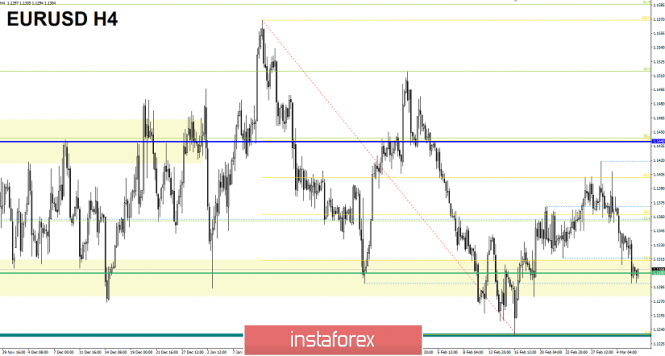 - Consider buy positions in case of leveling and fixing higher than 1.1320.

- Positions for sale are considered after fixing the price lower than 1.1280.

Analyzing a different sector of timeframes (TF ), we see that in the short term, an upward interest is shown. But due to the fact that there is now a stagnation, the indicators might change. Intraday and mid-term perspective changed interest to descending.

The current time volatility is 17 points. It is likely to assume that if the stagnation stops and we see a breakdown of one or another border, the volatility might increase as a result of the average daily rate. Otherwise, volatility will remain low.

The material has been provided by InstaForex Company - www.instaforex.com
Trading recommendations for the EURUSD currency pair - placement of trading orders (March 6)