On Friday, the Canadian dollar lost all positions. In just a few hours, it weakened by almost 200 points against the US currency. The Canadian was barely able to gain a foothold in the middle of the 31st figure. Disappointing statistics pushed the currency out of the multi-day range, after which the pair usd / cad reached the level of 1.3305.

This week, the northern dynamics of the pair may get its continuation, since the March meeting of the Bank of Canada will take place on Wednesday. However, the Canadian plays out the expected results of the meeting for now. Given the weakness of the latest macroeconomic reports, it is not difficult to predict the tone of the regulator's statements. Friday data on GDP growth in Canada only confirmed this fact, only adding to the general negative picture of a fundamental nature.

The volatile reaction of the market is fully justified because the growth of the Canadian economy has actually stopped. On a monthly basis, GDP for the second month in a row is in the negative area (-0.1%). If we talk about quarterly terms, in the last quarter of last year, the key indicator grew by only one tenth of a percent compared to the third quarter. The dynamics of GDP, calculated on an annualized basis (it is believed that such an assessment is closer to the US estimate of growth rates), is also disappointing. Instead of the expected growth of up to 1%, the real numbers were much lower - 0.4%. 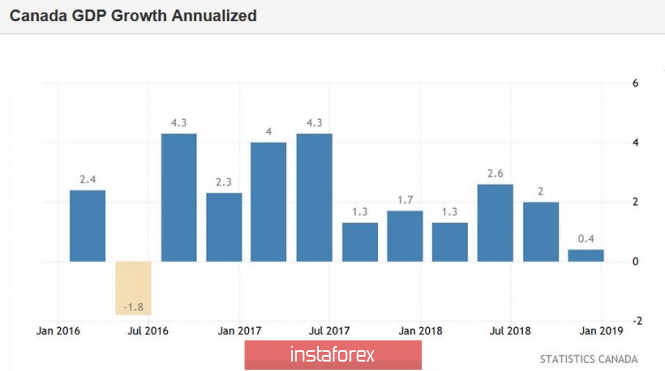 It is worth noting that such a weak result is due not only to the decline in the oil market at the end of last year (although this factor is one of the key factors). The structure of the indicators suggests that the Canadian economy has slowed down due to lower growth in the housing market and a general decline in consumer confidence. For example, the average cost of housing over the past year has decreased by almost six percent, in particular due to lower demand and more stringent and complex rules for obtaining mortgage. The remaining structural elements of GDP also show negative dynamics: for example, the volume of investment in the Canadian economy decreased by 2.7%, investment in real estate - by 3.9%, and new projects - by 5.5%. The dynamics of the industrial sector are also disappointing, especially against the background of an uncertain situation in the oil market.

A significant drop in consumer activity is also a serious problem. In January, the core retail sales index remained in the negative area again (for the third month in a row), while the increase in the full-time employment rate slowed down significantly, while part-time employment was gaining momentum. This is reflected in the dynamics of wage growth in the country, and the dynamics of household spending has been falling for the second quarter in a row.

This dynamic inevitably leads to a weakening of price pressure. The January consumer price index rose only to 0.1% on a monthly basis (with a weak growth forecast to 0.2%) and decreased to 1.4% in annual terms (this is the weakest growth rate since October 2017). Core inflation also showed a negative trend, falling from 1.7% to 1.5% (g / g). The most significant decrease in electricity prices in January - immediately by 6.9% compared with the previous year. 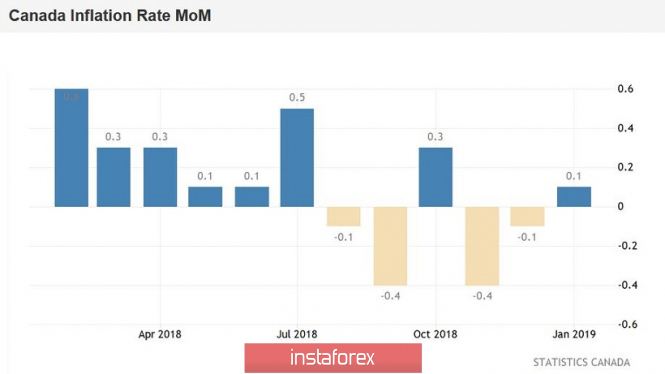 Thus, almost all macroeconomic indicators - both the most important and secondary - show a slowdown or stagnation. A kind of quintessence was the Friday release of data on the growth of Canadian GDP. Now, there can be no doubt: the Bank of Canada on Wednesday, firstly, will take a waiting position and keep the parameters of monetary policy in its previous form; secondly, he will voice "dovish" rhetoric, announcing a long pause in the matter of raising rates. By and large, the head of the Central Bank Stephen Poloz at the end of February already hinted at such a decision, but the extremely weak growth of the Canadian economy can strengthen the "bearish" mood among the members of the regulator. By the way, there are more and more rumors on the market that members of the Canadian regulator will follow their American counterparts and will wait until the end of the year.

Despite such an unambiguous fundamental background for a pair of usd / cad, the technical picture does not say anything definite. The Ichimoku Kinko Hyo indicator is "silent", hinting only at a possible corrective decline by the fact that the pair is under the Kumo cloud. At the same time, the price is located between the middle and upper lines of the Bollinger Bands indicator on the daily chart, holding back the downward movement by the support level, which is located on the middle line of the indicator and corresponds to 1.3225. The resistance level is the upper line of the Bollinger Bands and the price is 1.3340.

Summarizing what has been said, one can come to the conclusion that from the point of view of the foundation, the priority remains over the north, especially on the eve of the March meeting of the Bank of Canada. A pair of usd / cad can be ignored even the temporary weakening of the greenback, which was under pressure after Trump's speech during the weekend. The American president again criticized the Fed's policy and complained about the high dollar rate. These factors, according to Trump, are constraining factors for the growth of the US economy. The dollar index at the opening of the trading week slipped a bit, but rather quickly recovered. The fact is that it is not the first time when Trump voiced such rhetoric, but this criticism does not have any practical significance (in the context of the dismissal of the Fed head or other cardinal decisions). Given this fact, the market actually ignored the impulsive words of the American president. In other words, a pair of usd / cad has every chance to go into the area of the 33rd figure and test the first resistance level of 1.3340.

The material has been provided by InstaForex Company - www.instaforex.com
USD / CAD: bad news ahead of Bank of Canada meeting

GBP/USD At yesterday's meeting of the Fed, it was announced that the hawkish monetary policy was terminated and even some softened their stance by stopping the reduction of the Fed's balance sheet in October of this year. But the situation around Brexit is heating up. Prime Minister Theresa May requests the EU to give them a delay of 3 months in order to resolve the issue of the agreement. The EU will obviously agree, this issue will be resolved today at the EU summit. Formally, the pound sterling could strengthen on this news. The technical signal should be a consolidation of the price above the MACD line on the four-hour chart (1.3241), in this case, growth to the peak of March 13, 1.3380 is possible. But pessimism could prevail among investors, given that the Parliament failed to reach an agreement. If the price moves below the low of the previous day (1.3145), the pound may fall to the level of 1.3000 – to the MACD line on the daily chart. The material has been provided