Wave analysis of EUR / USD for March 11. Wave 5 could complete its construction 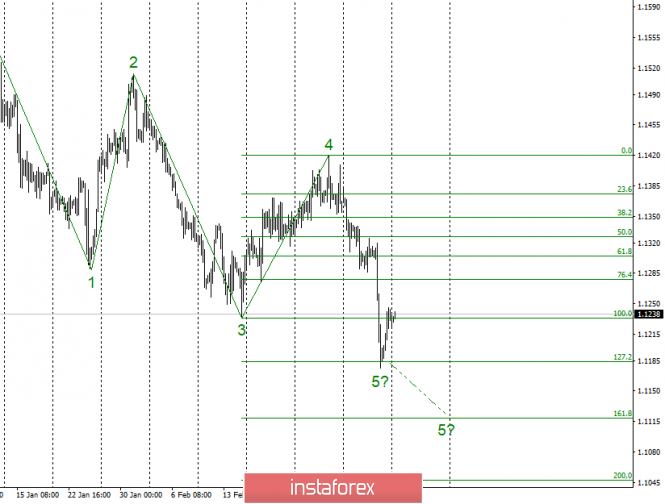 On Friday, March 8, bidding ended for the pair EUR / USD by 40 bp increase. An ideal test of 127.2% on the Fibonacci grid was built on the size of wave 4, which led to the departure of quotations from the lows reached. This moment also suggests that the pair is ready to complete the construction of the downward wave 5, as well as the entire downward trend section. If this is true, then it will proceed from the current position of the Eurocurrency to build a minimum of the corrective part of the trend. However, there are doubts that wave 5 is completed. And thus, it will not take a more complex form. The news background for the pair remains neutral. Although after the "pigeon" mood of the representatives of the ECB, the euro may still remain under market pressure, which will complicate wave 5.

The pair remains within the limits of the assumed wave 5. But there is also an option in which the construction of this wave is completed. Thus, I recommend waiting for the breakout level of 127.2% for Fibonacci and only after that to re-sell the pair with targets located near the estimated mark of 1.1119, which corresponds to 161.8% of Fibonacci. Otherwise, we expect the construction of a new uptrend.

The material has been provided by InstaForex Company - www.instaforex.com
Wave analysis of EUR / USD for March 11. Wave 5 could complete its construction