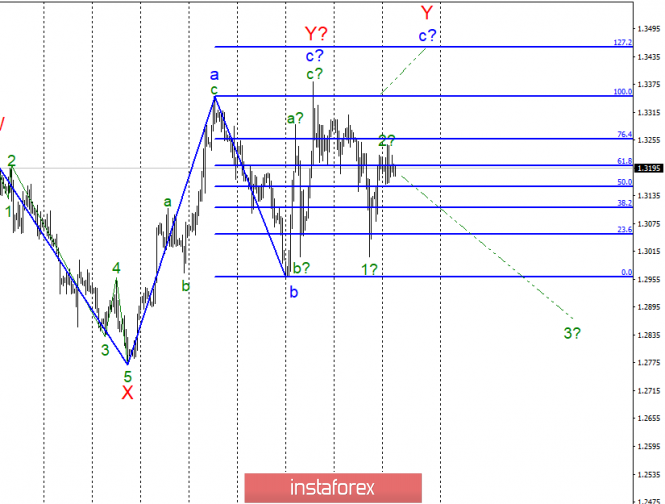 On March 25, the GBP / USD pair fell by 15 bps. Based on the current version of the wave marking, it is supposed to build a downward wave 3 in the composition of the downward trend section with targets located below the 29th figure. However, the news background remains the factor that is able to turn upside down in any trends of the market and the wave pattern. Yesterday, it became known that on March 27, the British Parliament will hold a series of votes on all possible scenarios of Brexit at once, hoping that one of them will be adopted. Such a decision was taken by the parliament, despite the opinion of Prime Minister Theresa May, to which there is less and less trust in the country. Thus, tomorrow we can witness new "high-profile" events that will undoubtedly cause active trading on the market.

The wave pattern allows for the construction of an upward wave with targets located near the estimated level of 1.3454, however, I recommend returning to this option only in case of a successful attempt to break through the level of 100.0%. A more likely development of events is now the construction of a downward wave with targets below 29 figures, thus, I recommend sales in small volumes. I also recommend not to lose sight of what is happening in the UK, especially the vote tomorrow.

The material has been provided by InstaForex Company - www.instaforex.com
Wave analysis of GBP / USD for March 26. Suspended state by Brexit