Weekly review of the foreign exchange market from 03.25.2019

I don't even know how the speculators will live when this whole saga with Brexit comes to its logical end. It gave them so many unforgettable moments. The past week was no exception, although it is becoming clearer that the denouement is just around the corner. At first, Theresa May said that she would not once again put to the vote her version of the divorce agreement, which had already been rejected twice by the House of Commons. At first, she decided to get a reprieve from Brussels so that Jean-Claude Juncker could fulfill his earlier promise to negotiate trade-related items with all countries of the European Union. After all, earlier the head of the European Commission complained that it was precisely these points that had not yet been approved and would not be in time for Brexit. Here, the British prime minister asks the EU to slightly delay the divorce so that it could finally include unfortunate points in the agreement. But it was not there. Not only did Europe refuse to postpone Brexit until June 30, it reiterated that the version of the agreement proposed to London is not subject to revision. That is, no trade agreements will be made even after Brexit. Moreover, Brussels acted quite unpleasantly, saying that it was ready to postpone the divorce until May 22, but only if the House of Commons adopts the version of the agreement imposed on it, which many MPs rightly consider as bonded. Moreover, a number of politicians from Great Britain argue that the adoption of this agreement threatens the territorial integrity of the United Kingdom. If London refuses to accept the agreement for the third time, then they will be asked to exit the EU no later than April 12. Well, Brussels' statement that that London can still cancel the referendum's results, but this should be done before March 29, that is, they are suggesting that the entire British ruling class commit political suicide. As a result, even Her Majesty's subjects could not stand it and on Sunday a huge rally was held on this matter. Brexit supporters stood side by side, and its opponents. Some demanded a repeated referendum, while others were outraged that there is still no agreement that would suit the UK, and did not pursue the economic interests of some kind of Europe. Well, the pound was thrown from side to side with every breath of political wind.

But the Federal Reserve did not lag behind London in terms of public entertainment. Even before the results of the meeting of the Federal Commission on Open Market Operations were announced, the dollar became cheaper, since many were worried that the US central bank would seriously hint at monetary easing in the near future. These concerns were justified after the European Central Bank actually announced the easing of its own monetary policy. However, the results of the meeting exceeded all expectations and significantly upset investors. First, the Federal Reserve gave a clear explanation that the next refinancing rate hike will happen no earlier than next year. Secondly, since April, the regulator has reduced the amount of monthly repurchase of assets that it has accumulated on its balance sheet since 2008, when it was necessary to urgently save the US banking system. But what is much more important is that as early as September, the Federal Reserve will stop this heinous event and will keep on its balance this magnificent bag without a handle until better times. That is, the Federal Reserve, following the European Central Bank, announced the easing of its monetary policy. 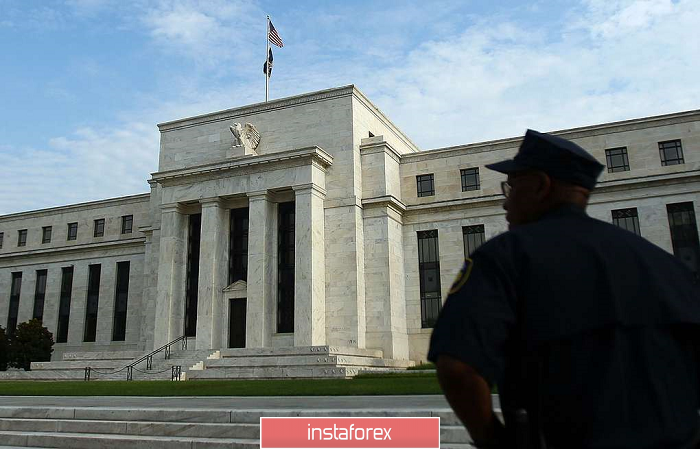 But it is a worthy bit of distraction from the exciting events and look at the boring statistics, which was not much. Thus, home sales in the secondary market of the United States soared by 11.8%. However, preliminary data on business activity indices somewhat spoiled the mood, as the service sector index fell from 56.0 to 54.8, and production, from 53.0 to 52.5. Well, as a result, the composite index of business activity fell from 55.5 to 54.3. But this is preliminary data. But the data on applications for unemployment benefits obviously pleased, as the number of initial applications decreased by 9 thousand, and repeated ones by 27 thousand. In Europe, data on the construction sector was released, which recently grew by 0.7%, and now it is down by 0.7%, which clearly does not add optimism. Yes, and preliminary data on business indices were not pleasing. The index of business activity in the services sector fell from 52.8 to 52.7, while the manufacturing index fell from 49.3 to 47.6, which makes it all very sad. And, of course, the composite index of business activity fell from 51.9 to 51.3.

Well, in the UK, Brexit was not the only entertaining thing, because the previous week was also the week of macroeconomic data. First, data on the labor market came out, which, although they showed a decrease in the unemployment rate from 4.0% to 3.9%, as well as the stability of the average wage growth rate without taking into account bonuses, still raise a number of concerns. The number of applications for unemployment benefits amounted to 27.0 thousand versus 15.7 thousand in the previous month. But what worries investors the most is the slowdown in the average wage growth rate, excluding bonuses, from 3.5% to 3.4%. And this suggests that employees, whether they are not fine, are not particularly eager to hunch and work overtime. But the sadness about this dispelled data on inflation, which showed its growth from 1.8% to 1.9%. However, this joy was short-lived, since the growth rate of retail sales slowed down from 4.1% to 4.0%, which completely blocked inflation. But the main disappointment was the outcome of the Bank of England meeting. The regulator once again frightened young children with tales of the night about the terrible future of the British economy in the event of a "hard" Brexit, which, as recent events have shown, is becoming more and more real. 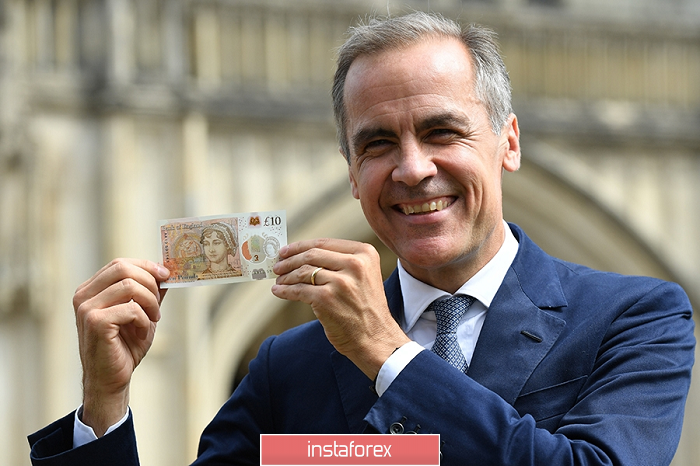 In order to build some plans for a new week, first of all you need to take the US data into account, which has the greatest weight for financial markets. The main news will be the data on GDP for the fourth quarter, and the total, and if the preliminary figures showed a slowdown in economic growth from 3.4% to 2.6%, now everyone is waiting for even more cooling, right up to 2.4%. If these fears are justified, then the next loud statements and steps against Brexit will be the only ones that are able to save the dollar from falling. In addition, the number of applications for unemployment benefits should increase by 4 thousand. Also, the number of building permits issued could decline by 0.6%, but what is much more terrible is the number of construction projects starts, which can fall by as much as 28.3%. This is generally more like a catastrophe. The expected growth in sales of new homes by 1.6% is unlikely to somehow change investor sentiment.

In the EU, there is practically no macroeconomic data. Attention should be paid only to the data on UK GDP, which should confirm the fact of a slowdown in economic growth from 1.6% to 1.3%. So, in consideration of the US data, both the pound and the single European currency should grow. However, there is a Brexit factor, and if the House of Commons again, for the third time, rejects the "divorce" agreement, the United Kingdom will have to leave the European Union on April 12 without a deal. That is, the "hard" option. However, taking into account the content of the text of the agreement, that with a deal, or without it, there is no difference for the UK. So, most likely, the MPs again rejected it. However, we can not exclude another option, because the signing of the agreement gives at least some hope that it will be possible to supplement it through an economic component. Moreover, standing on the edge of the abyss, British politicians can dramatically change their shoes in the air and change their minds. The option of a repeated referendum is not excluded. You should not ignore the possibility of abandoning Brexit. That is, now the games are over. That is until Brexit's months remain, you can grimace and the like. Now everything is either that or that way. There is no time to think. I had to think before. And considering that earlier no one, from those who should, did not think, but pulled the cat by the tail, anything can happen. The acceptance of the divorce agreement is the only thing that can cause an increase in both the pound and the single European currency.

If the House of Commons bends and accepts the agreement, as well as the postponement of the exit date from the European Union, this will be a signal to normalize the situation, and the single European currency will rise to 1.1450. In all other cases, it is worth waiting for its decline to 1,1200. 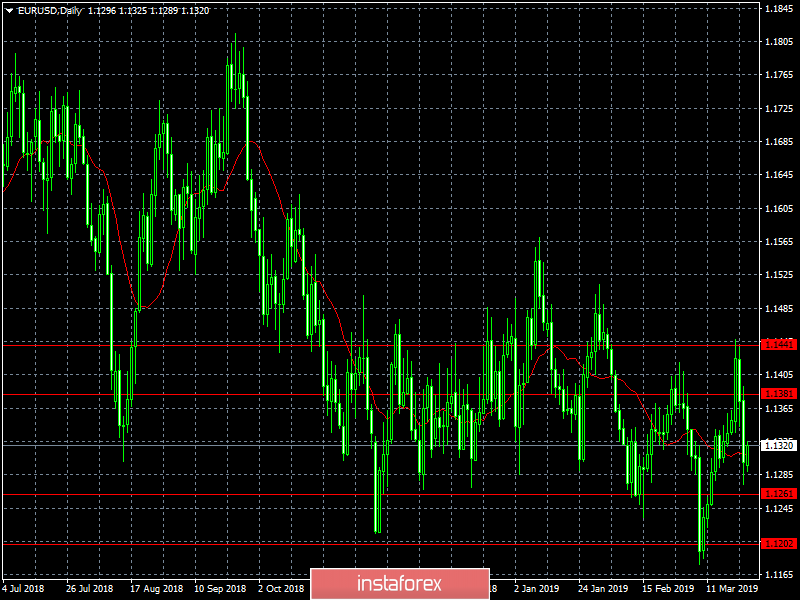 The pound has a similar deal, and if the House of Commons accepts the agreement on the third attempt, it will strengthen to 1.3350. Otherwise, we are waiting for a decline to 1.3025. 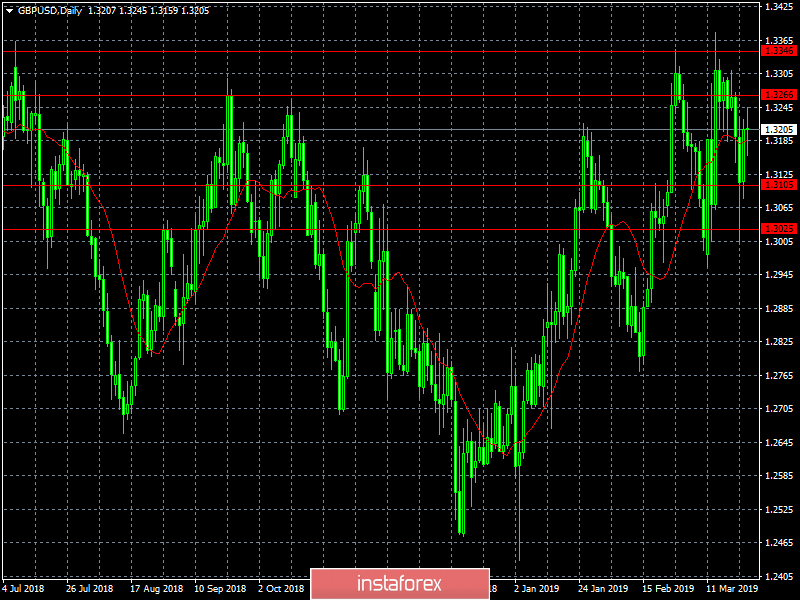 The material has been provided by InstaForex Company - www.instaforex.com
Weekly review of the foreign exchange market from 03.25.2019