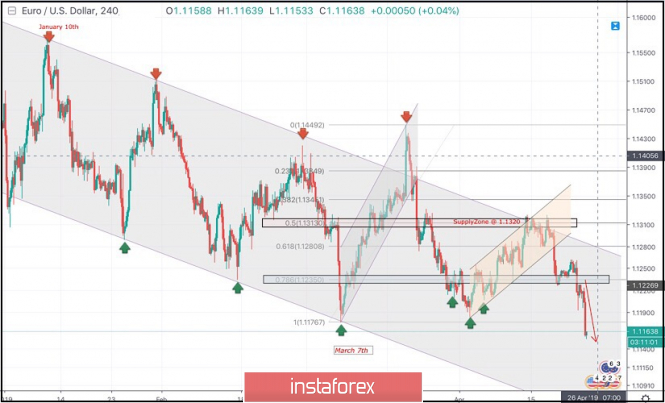 For Intraday traders, the price zone around 1.1235 (78.6% Fibonacci) stood as a temporary demand area which paused the ongoing bearish momentum for a while before bearish breakdown could be executed two days ago.

Conservative traders were advised to wait for a bullish pullback towards the newly-established supply zone around 1.1235 for a valid SELL entry.

On the long-term, bearish persistence below 1.1235 enhances further bearish decline towards 1.1170 then 1.1115 if enough bearish momentum is expressed.

A valid SELL entry was suggested around 1.1235 upon Yesterday's bullish pullback.

In Asia, Japan will release the BOJ Policy Rate, Monetary Policy Statement, and BOJ Outlook Report, while the US will publish some economic data such as Treasury Currency Report, Natural Gas Storage, Unemployment Claims, Durable Goods Orders m/m, and Core Durable Goods Orders m/m. So there is a probability the USD/JPY pair will move with low to medium volatility during this day. TODAY'S TECHNICAL LEVELS: Resistance. 3 : 112.67. Resistance. 2: 112.45. Resistance. 1: 112.23. Support. 1: 111.97. Support. 2: 111.75. Support. 3: 111.52. (Disclaimer) The material has been provided by InstaForex Company - www.instaforex.com