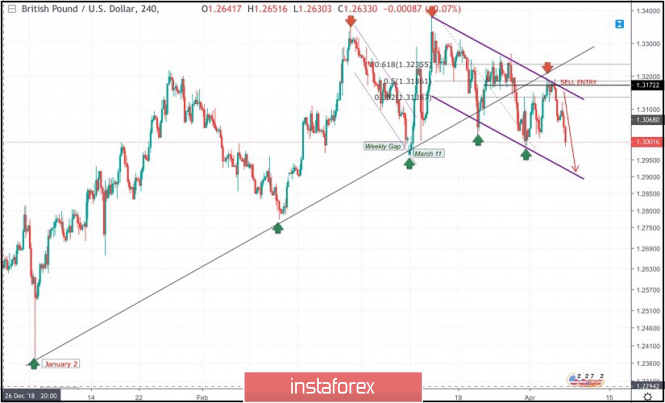 This uptrend line managed to push price towards 1.3200 before the GBP/USD pair came to meet the uptrend again around 1.2775 on February 14.

Another bullish wave was demonstrated towards 1.3350 (Feb. 27) before the bearish pullback brought the pair towards the uptrend again.

A weekly bearish gap pushed the pair towards the up-trend line (almost reaching 1.2960) before the bullish breakout above short-term bearish channel was achieved on March 11.

Shortly after, the GBPUSD pair pursued the bullish momentum towards 1.3130, 1.3200 then 1.3360 where the GBPUSD failed to achieve a higher high than the one achieved on February 27.

Instead, significant bearish pressure was demonstrated below 1.3250. That's why, the short term outlook turned to become bearish towards 1.3150 - 1.3120 where the depicted uptrend line failed to provide any immediate bullish support leading to obvious bearish breakdown.

By the end of last week, the price levels of 1.3020-1.3000 (the lower limit of the depicted movement channel) demonstrated significant bullish rejection.

This brought the GBPUSD pair again towards the price zone of (1.3160-1.3180) where the upper limit of the depicted bearish channel as well as the backside of the depicted uptrend line are located.

Bearish rejection was anticipated around these price levels (1.3160-1.3180) where the current bearish decline was initiated.

Further bearish movement is expected towards 1.2950-1.2920 where the lower limit of the depicted channel is located.