AUD/USD: positive from China, Vale's tragedy and the weakening greenback

The Australian dollar ended the trading week on a positive note: together with the American currency, it updated its two-month high, reaching 0.7175. This dynamic is partly due to the greenback's weakness, but the aussie has its own arguments for growth. In general, any more or less large-scale growth of AUS/USD should be treated with caution: as a rule, the pair hits the ceiling of the price range and then pulls back. But there is also an alternative option in which the pair changes the price niche - most often in the outline of the current trend or completely changing the price direction on a global scale (which happens much less often).

Since December last year, the AUD/USD has been fluctuating in a fairly wide price range - 0.70-0.7250. Both bears and bulls of the pair repeatedly tried to break through the boundaries of this aisle, but all these attempts have failed. The fundamental background is too controversial for investors to undoubtedly give preference to an increase or a decline. Nevertheless, the struggle for influence continues, and eventually one of the parties will prevail: either the sellers will consolidate in the area of 0.69 and below, or the buyers will return the pair to the range of 0.73-0.75 (0.7580 to be more precise ).

At the end of last week, the aussie made a "serious bid to win," nearly rising to the boundaries of the 72nd figure. A dilemma arises: either to sell the pair from current levels or "invest" in growth, given the possible end of the trade war between the United States and China. The question is really difficult, since the Australian dollar is very sensitive to the news background regarding the prospects for US-China relations. If Beijing and Washington reach the finish line of negotiations, it will help the AUD/USD bulls to reverse the situation and gain a foothold in the 73rd figure, with the intention of further growth.

In spite of that, the upward impulse from Friday was not bound by the topic of trade negotiations. The pair grew due to the general interest of traders to risky assets, as well as due to the weakening of the dollar amid growing commodity markets. Anti-risk sentiment significantly declined due to the postponement of Brexit, as well as progress in negotiations between the United States and China. In addition, the Chinese data was pleasing: first, exports in dollar terms rose by 14% in March after a substantial decrease of 20% in the previous month. In addition, the volume of bank lending has also significantly increased: last month, this figure doubled compared with the previous period, reaching almost 1.7 trillion yuan (ie, 251 billion dollars).

Imports somewhat disappointed (the figure in March decreased by 7.6% compared with 5.2% in February). But there is one point worth noting: in March, China increased imports of soybeans by 10%. This is important in the context of the US-China trade negotiations. Let me remind you that at the beginning of this year, Beijing agreed to increase the purchase of American agricultural products - primarily soybeans, corn and wheat, totaling $ 30 billion. The final volumes should exceed even those figures that were before the start of the trade war. The March figures show that the Chinese are fulfilling their commitments - at least in this part.

In other words, the release of Chinese data complemented the optimistic fundamental picture and supported commodity currencies, including the Australian dollar. In addition, the Australian felt the support and the growth of the commodity market, in particular copper and iron ore. Unfortunately, this trend is due to the tragic events. Let me remind you that at the end of January, there was a breakthrough of the dam of the Corrego de Feijao mine in Brazil, which belongs to the Vale company. Waste from the mining and processing complex flooded the nearby municipality, killing more than 200 people. Such incidents have consequences – including economic ones. At the end of March, the Brazilian court froze the company's assets worth more than four billion dollars, thus covering the potential costs of compensation, salaries and other unforeseen expenses. 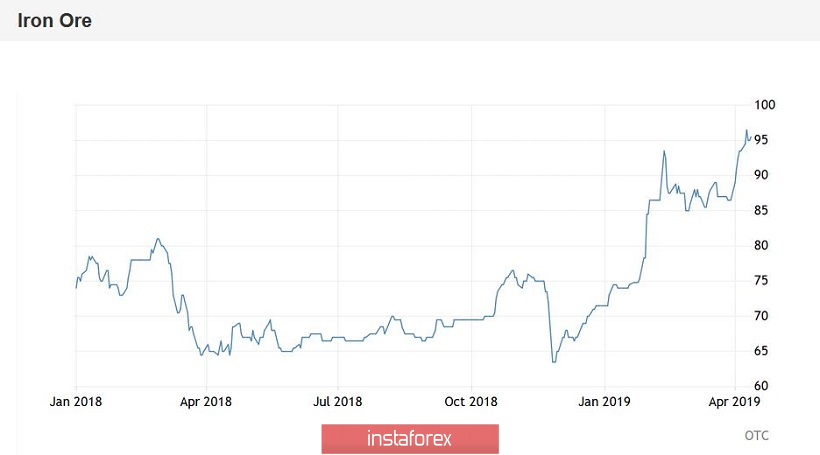 The commodity market responded instantly: for the first time in a long time, the cost of a ton of iron ore exceeded the $90 mark (now it is trading at $95 per ton). The fact is that the Brazilian company Vale and the Australian Rio Tinto and BHP Billiton are the largest mining companies in the world (actually monopolists of the market) - and have devalued the value of iron ore for a long time. As a result, supply exceeded demand (primarily due to China and the slowing of the global economy), putting indirect pressure on the Australian dollar. But now the situation has changed - one of the "three whales" of the market actually dropped out of the game, and therefore the cost of iron ore has increased dramatically. Copper also demonstrates positive dynamics, reacting to positive signals from China.

Thus, the AUD/USD pair has the potential for further growth. On the daily chart, the pair is at the top of the Bollinger Bands indicator and above all the lines of the Ichimoku indicator: this indicates the priority of an upward movement. To determine the resistance level, let's move to the weekly timeframe. As you can see, the strongest resistance level here is the mark of 0.7280 - at this price point the upper line of the Bollinger Bands indicator coincides with the lower boundary of the Kumo cloud on W1. In other words, the Aussie has a 100-point price gap for its growth, but when the pair approaches the mark of 0.7280, you will need to be careful with long positions.

The material has been provided by InstaForex Company - www.instaforex.com
AUD/USD: positive from China Vale's tragedy and the weakening greenback