From America to the United Kingdom and from Russia to Australia, cryptocurrency taxation in major bitcoin strongholds is complicated. Contradictory or non-existent laws, excessive red tape, and maddeningly vague guidelines have conspired to make the tax-paying process more arduous than it need be. Now, a number of advocates are pushing for simplified crypto tax guidelines. Fixing the taxation will be main focus in the next period for cryptos. 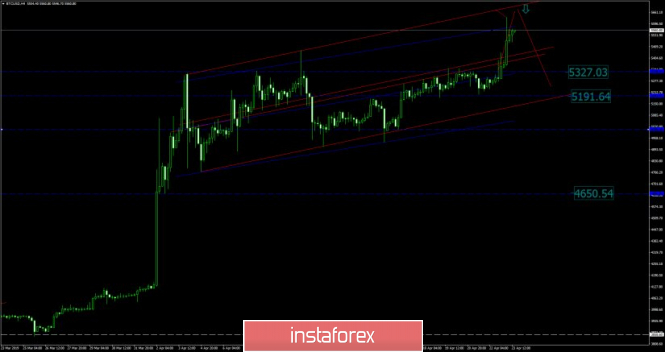 According to the H4 time-frame, as we mentioned yesterday, the potential for bull move and re-test of upper channel diagonal was in the play and that exactly happened. Since the BTC is trading near the critical resistance at $5.700, our advice is to watch for potential reversal and confirmation of reversal. To confirm reversal, you want to see series of lower lows and lower highs. For now, buyers are in control and the next upward station is set at $5.700. In case of reversal, watch for supports at $5.327, $5.191 and $4.650.

The material has been provided by InstaForex Company - www.instaforex.com
2019 Bitcoin analysis for April 23