Bitcoin. Bearish signal for the correction of Bitcoin

Another large wave of Bitcoin growth allowed reaching the resistance level of 5670, but a bearish divergence is formed on the MACD indicator. This suggests that the rate in the near future will either remain in the side channel, or a downward correction will be formed. Therefore, I do not recommend to hurry with the purchase at the current levels.

Now, a new signal for buying will be the formation of a false breakdown in the support area of 5520, as it was yesterday, or a rebound from a larger minimum in the area of 5400 and 5220. The main task of the bulls for today will be to hold the support level of 5520, as well as a breakthrough and consolidation above 5660, which will resume the upward trend and lead to an update of the highs in the region of 5880 and 6000 USD, where I recommend taking profits.

The bears' task for today will be to return and consolidate under the intermediate support level of 5520, which will lead to a larger downward correction to the level of 5400 and 5220, where I recommend taking profits. The formation of a false breakout with the update of yesterday's high around 5660 and confirmation of this false breakout by divergence on the MACD indicator will also be a good signal to open short positions in Bitcoin. Otherwise, you can sell on a rebound from 5880. 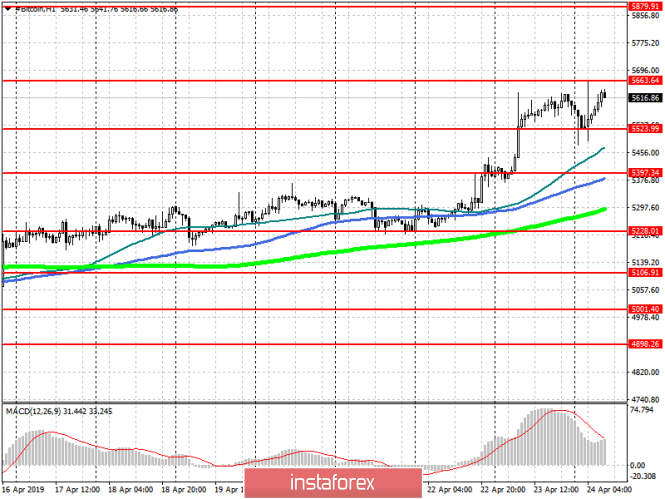 The material has been provided by InstaForex Company - www.instaforex.com
Bitcoin. Bearish signal for the correction of Bitcoin