Bitcoin. Bulls coped with the pressure and continued growth

Yesterday, the reversal model for Bitcoin, which was almost formed, put buyers of the cryptocurrency in a rather nervous position, but they successfully got out of the current situation. Not letting Bitcoin below the support of 5220, which was responsible for the entire model, the major players continued the upward trend, which led to the update of the monthly highs.

Now, a new signal to buy will be the formation of a false breakdown in the support area of 5520, which will lead to the continuation of the upward trend and the update of the large resistance at 5690, where I recommend taking profits. However, the main goal of the bulls will be the highs of 5880 and 6000 USD. In the case of a decrease in the Bitcoin rate, the support will also be provided by the area of 5400 and 5220.

The task of the bears for today will be to return and consolidate under the intermediate support level of 5520, which will lead to a larger downward correction to the level of 5400, where I recommend taking profits. A more optimal scenario for opening short positions in Bitcoin would be a test of the maximum of 5690 and 5880. 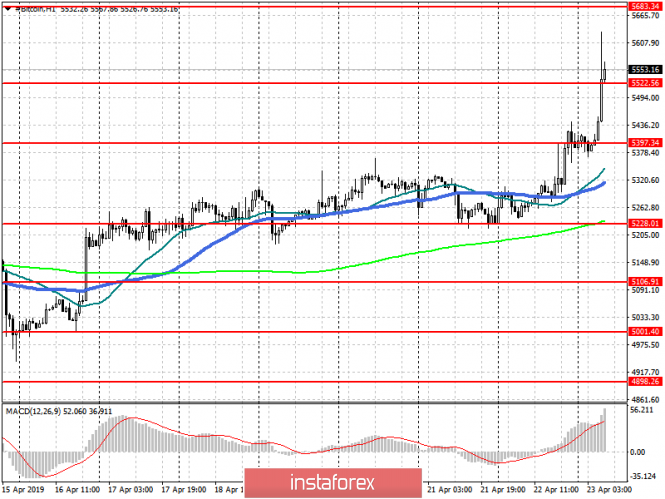 The material has been provided by InstaForex Company - www.instaforex.com
Bitcoin. Bulls coped with the pressure and continued growth