Bitcoin. The volatile situation for Bitcoin

Despite the fact that the Bitcoin rate remains above 5000 USD, the situation for buyers is not for the better.

Over the weekend, it was not possible to update the highs, which led to the formation of a smooth reversal, which gradually increases the pressure on Bitcoin. If we talk about more long-term prospects, then a number of companies' studies indicate that Bitcoin accumulates a position for a further upward trend. In particular, this is stated in the report of Adamant Capital, where they are confident that the bearish cycle of the cryptocurrency market ends and the accumulation phase begins.

Buyers failed to get above the resistance of 5 330, from which a smooth bearish turn is formed. All that is required for the bulls is to break above this range today, which will open a real prospect for a further upward trend with an update of the highs of 5450 and 5680, where I recommend fixing the profits. In the scenario of Bitcoin exchange rate decline, to open long positions, an interesting level will be the region of 5220, as well as a larger level in the area of 5100.

The main task of the bears is to consolidate under the intermediate support level of 5220, and update the minimum of 5 150, which will lead to the demolition of stop orders of buyers and increase the pressure on Bitcoin. In this scenario, we can expect a decrease in the cryptocurrency to the area of 5000 and 4890, where I recommend fixing the profit. In the scenario of continued growth, you can look at the meek positions during the formation of a false breakdown in the area of 5330 or a rebound from a large resistance of 5440. 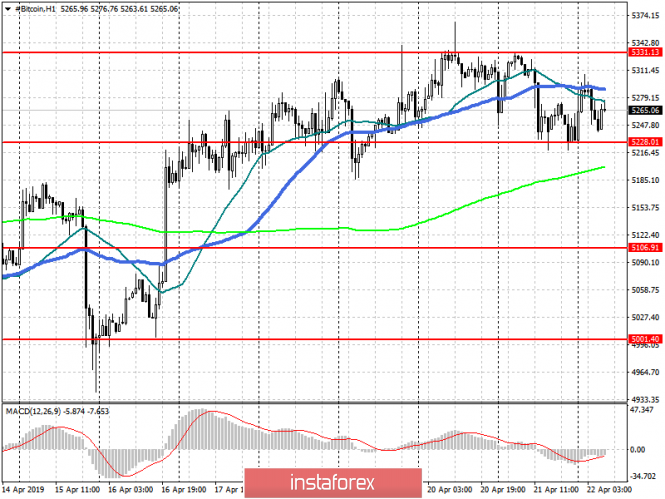 The material has been provided by InstaForex Company - www.instaforex.com
Bitcoin. The volatile situation for Bitcoin