Brent sweeps away all obstacles

The aggravation of the military conflict in Libya has become a catalyst for the rise in oil prices to 5-month highs. The volume of production in this country is about 1.1 million b/s, which is equivalent to about 1% of the global figure, so concerns about supply disruptions naturally played into the hands of the "bulls" on Brent and WTI. The rise in the geopolitical risk premium is an important driver of the rally of futures for black gold, although, of course, the main reason for the more than 30% increase in the cost of both varieties since the beginning of the year should be sought in the effective actions of OPEC.

In contrast to 2017, when very similar to the current agreement on the reduction of production did not lead to a rapid March of oil to the North. In 2019, Saudi Arabia and its allies easily cope with the task of stabilizing the market. Riyadh, which reduced production to a 4-year low of 9.82 million b/s and does not stop reducing exports, acts as the main Skirmisher. It is assisted by US sanctions against Iran and Venezuela, as well as the tense situation in the Middle East, including Libya. 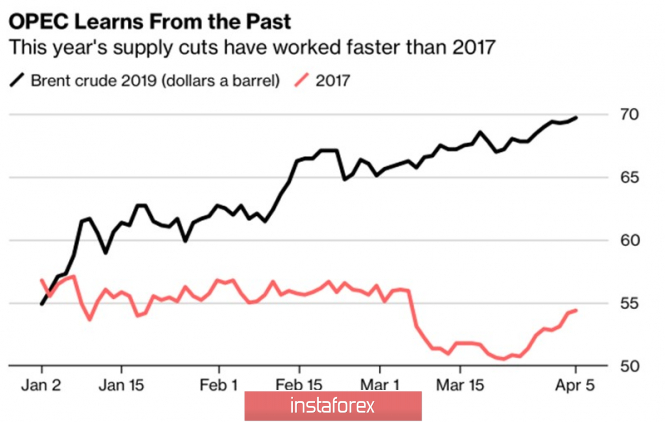 Of the two evils, one has to choose the smallest one, so when a dilemma arose between unwanted help from American manufacturers and the need to improve the budget of OPEC countries, the cartel chose the second option. US oil companies have created favorable conditions, but Saudi Arabia and other countries have received more or less acceptable oil prices for local economies. Russia, which is somewhere in the middle, believes that the process has gone too far and there is no point in helping the States further. According to the Minister of Energy of the Russian Federation Alexander Novak, if the market was able to balance, then you should not extend the agreement to reduce production for the second half of the year.

Goldman Sachs believes that the cost of Brent above $70 per barrel signals an increase in the deficit. The bank raised its forecast for the average price of the North Sea variety in the second quarter from $65 to $72.5, but believes that the situation will change dramatically in July-December. Oil will fall due to increased American production. Moreover, the first signs of oversaturation in the US black gold market are already visible: if the forecast of Bloomberg experts of the growth of US by 2.5 million barrels in the week to April 5 comes true, the figure will increase for the third five days in a row.

One of the important drivers of the Brent and WTI rally was the growth of hopes for ending the US-Chinese trade war, which should potentially increase global oil demand. Donald Trump, instead of the usual applications on Twitter, decided to indicate his desire to provoke a trade conflict with the EU. Washington's intention to impose duties on $11 billion European imports could be the first step in a new war.

Technically, as expected, the inability of the bears to keep Brent quotes below $68.5 a barrel was evidence of their weakness and allowed the bulls to continue the rally towards $72.8 as part of the correction to the Shark pattern's CD wave.

The material has been provided by InstaForex Company - www.instaforex.com
Brent sweeps away all obstacles