The consumer sentiment index from the University of Michigan fell in April to 96.9p against 98.4p in March. Despite the fact that the decline was stronger than the forecast, the index as a whole remains close to highs, moving in a sideways trend and does not give rise to panic. It is noted that the impact of tax reform on consumer confidence has almost disappeared. This factor is no longer perceived as the main criterion for economic growth and also has faded into the background.

The main factor, due to which the index continues to remain at a high level, is low inflation combined with an increase in nominal incomes. This leads to an increase in real incomes. The fall in real rates in the United States leads not only to increased business activity, but also to the growth of stock markets and risk appetite. 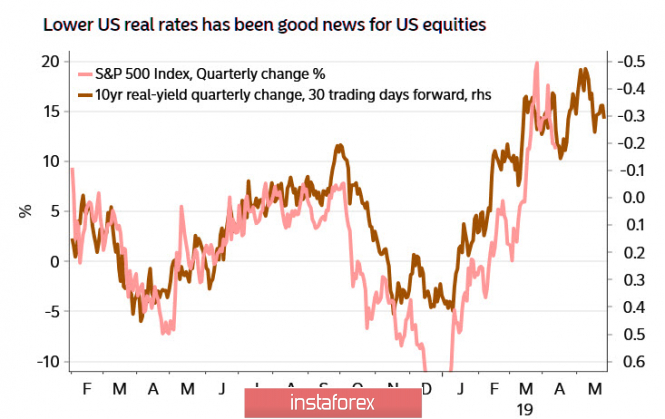 The growth of risk appetite, in turn, overshadows concerns about the approach of a recession. Investors in the current environment still see an immediate threat.

Important macroeconomic publications in the US are not expected at the beginning of the week. Trade negotiations with China are reportedly proceeding quite constructively, which also reduces global risks. The threat of a full-fledged trade war between the US and the EU has not yet received a real filling. Reducing tensions will contribute to some weakening of the dollar and defensive assets.

Friday brought a number of positive news for the euro, which makes it possible to count on the EURUSD growth in the short term. China initiated and export growth in March was 14.2% higher than forecast. The trade balance went into a confident surplus. Expectations for global PMI growth improved. Any risk reduction leads to a decrease in the demand for the dollar as a defensive asset. Asian growth supports the euro more than the dollar.

On Tuesday, ZEW's German business sentiment index will be published. A similar Ifo index has already shown growth for the first time since August 2018. Since it is considered a leading indicator for GDP, expectations for the whole German economy are changing to more positive ones. The PMI index for the services sector has managed to remain in the growth zone and is showing recovery, so any growth in the manufacturing sector will serve as a powerful signal in favor of GDP growth. 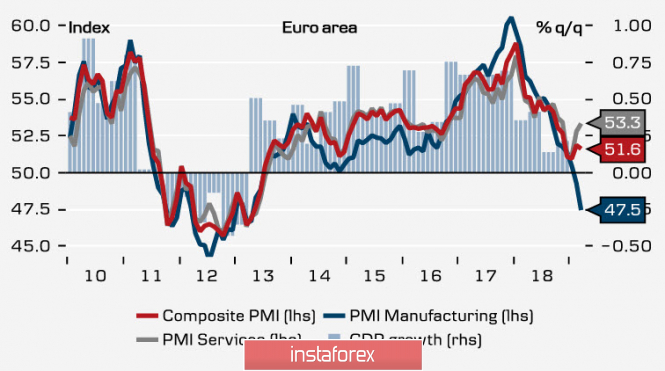 Obviously, the current positive growth is a temporary phenomenon. Most studies of analytical departments of large banks indicate a global problem that does not yet have a solution that satisfies everyone - the need to stimulate consumer activity in an environment where the possibilities of monetary methods have already been completely exhausted. Central banks cannot reduce rates, since they are already close to zero values. More so , they cannot expand lending, since balances have been inflated since QE. Therefore, either the recovery will be short-term, or non-traditional incentive methods will be found which might solve the problem of consumer activity.

Anyway, today, the euro is a favorite. The Friday maximum of 1.1223 will most likely be exceeded in the near future. EURUSD will try to leave above 1.1330 and gain a foothold for further expansion to the March peak of 1.1448.

Due to the postponement of the Brexit date to October 31, the political pressure on the pound has decreased. And it turned out that investors had lost their reference points for the pound, disregarding the continuous saga of macroeconomic reference points for several months. The chances that the decision on the new date of Brexit will be made in May are small. The UK will generally pass through elections to the European Parliament. The fight between conservatives and laborers for control of parliament is also postponed. The pound is traded in a narrow range and sees no reason to exit it.

On Tuesday, a report on the labor market will be published. Expectations on the average wage growth rates are neutral. Respectively, there are no changes in forecasts for GDP and inflation, which, in turn, does not give a pound of guidelines. GBPUSD will continue to trade in the range, resistance 1.3120, support 1.3047.

The material has been provided by InstaForex Company - www.instaforex.com
and GBPUSD remains in the range China supported risk appetite EURUSD continues to grow