EUR and GBP: euro and pound are traded in the channel amid further uncertainty with the direction

The European currency failed to break above the key resistance level around which trading is conducted throughout the week. Weak data on inflation in Germany does not please economists.

According to the report of the Federal Bureau of Statistics, the German consumer price index harmonized by EU standards in March of this year increased by 0.5% compared with February and only 1.4% compared with March 2018. The decline is directly related to the weak growth in food prices.

As before, the main driver of growth was energy prices, which increased by 4.2%, while food prices slowed down in March to 0.7%. As for the base index, which does not take into account the prices of energy and food, the growth in March compared to March of the previous year was 1.1%.

Data on producer prices in the United States returned to demand the US dollar in the first half of the day. The growth took place against the backdrop of rising energy prices.

According to a report by the US Department of Labor, the PPI final demand index in March 2019 rose by 0.6% compared with the previous month, while economists had forecast an increase in the index of 0.3% in March. The base index, which does not take into account volatile prices, rose by 0.3% in March compared with February. Compared with the same period of the previous year, producer prices rose 2.2%, while the base index rose 2.4%. 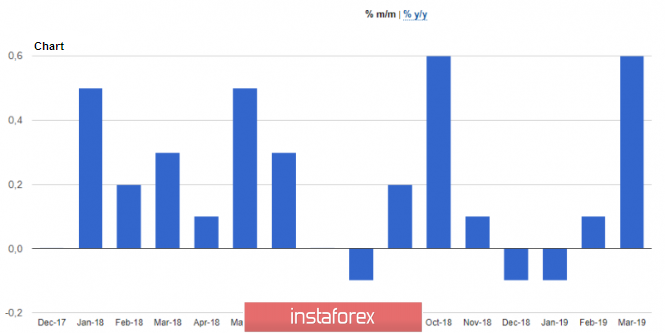 As for the technical picture of the EURUSD pair, it remained unchanged. Buyers of risky assets will still try to find strength and overcome resistance around 1.1290, which will lead to a strong increase in the euro in the area of the maximum of 1.1325 and 1.1360. With the further development of the bear scenario, support will be provided by the lower border of the side channel 1.1230, and its breakthrough will only increase the pressure on the euro, which will lead to a test of the minimum of the month around 1.1180.

The speech of the former Fed Chairman Janet Yellen was ignored by the market. Yellen noted that the Central Bank has the right policy. In her opinion, there is currently no need to reduce rates, however, it is possible that the Fed will need to reduce rates in the future since it is already clear that the US economy continues to face many uncertainties.

The British pound remains in a narrow side channel, and the volatility gradually decreases. Yesterday's news that the leaders of the European Union agreed to provide a respite for the UK to exit the block until October 31 did not affect the market, as the result was quite expected. In June, the UK will have to report on the progress of the Brexit talks.

The material has been provided by InstaForex Company - www.instaforex.com
EUR and GBP: euro and pound are traded in the channel amid further uncertainty with the direction