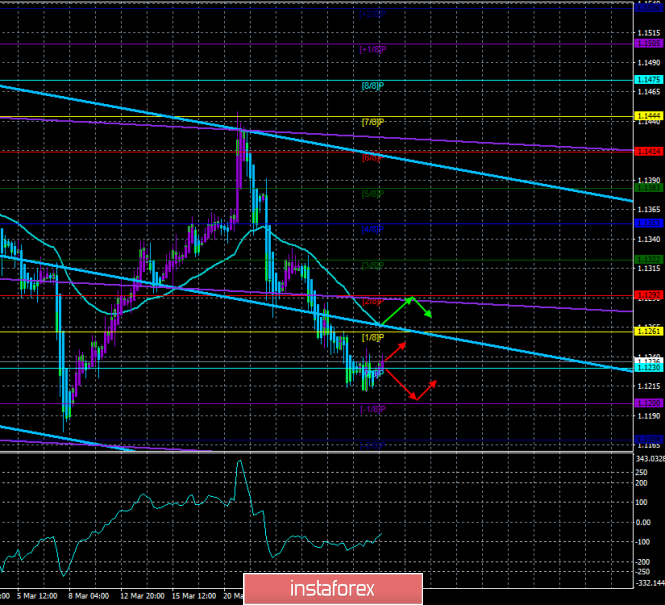 On Monday, April 1, the currency pair EUR/USD stopped falling. It stopped near its minimum values for a year and a half. Now, the pair is at the fork of two roads. One direction – up, which will be justified from a technical point of view, since the area of 1.1200 – 1.1270 has been tested for strength several times. The second direction is the breakthrough of this area and further down, up to price parity. Unfortunately, the fundamental component is not on the side of the euro. More precisely, there are some positive moments, but market participants do not react to them, or react, but very restrained. On the first trading day of the week in the eurozone, the publication of a preliminary consumer price index for March is scheduled, and in the States there will be reports on retail sales and business activity indices in the sectors of production and services of ISM and Markit. Both inflation in the EU and business activity indices in the US may disappoint. Thus, today traders will have something to pay attention to. From a technical point of view, the intraday has now begun a round of correction, which at the moment looks like a side one. Nevertheless, it can turn into ascending. In any case, while Heikin Ashi is directed up, it is not recommended to open new short positions.

The EUR/USD currency pair has begun to adjust. Thus, it is now recommended to wait for the completion of this correction and the Heikin Ashi indicator turning down, then short positions with targets at 1.1200 and 1.1169 will become relevant.

Buy positions are recommended to be considered no earlier than fixing the pair above the moving average line with targets at 1.1292 and 1.1322.

The material has been provided by InstaForex Company - www.instaforex.com
EUR / USD. April 1. The trading system. "Regression Channels". The euro cannot decide which way to go next