The euro-dollar pair started the trading week quietly and inconspicuously. In fact, the level closed on Friday. Such phlegmatism is quite justified, because the weekend is relatively quiet (in the context of the foreign exchange market). Many trading floors of the world will still be closed for today. Thus, in most countries of Europe, as well as in New Zealand and Australia, Catholics will celebrate Easter Monday, so the economic calendar of the foreign exchange market is virtually empty today. 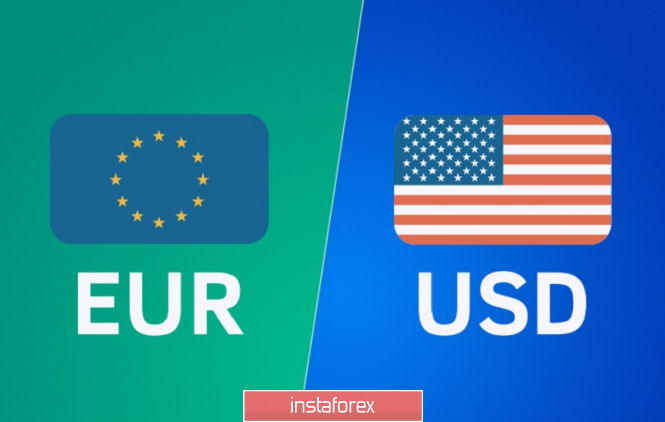 Only during the American session, we learn the dynamics of sales of American housing in the secondary market. After a strong increase in February (+ 11.8%), the same significant decline is expected in March (-3.8%). Given the absence of other macroeconomic reports, this release may affect the volatility of eur / usd, however, this impact will be limited, due to the secondary importance of the indicator. In other words, the truncated trading week is waiting for us again - the main events will unfold from Tuesday to Friday. However, the next few days cannot be called saturated for eur / usd traders.

For example, tomorrow, on Tuesday, only a few indicators will be published, which are also of a secondary nature. During the European session, we learn the indicator of consumer confidence in the eurozone. It is calculated based on the results of household surveys on their level of confidence in the current state of the economy and future development. Since May last year, the indicator has been in the negative area: having reached its peak in December (-8.3 points), it is gradually recovering, reaching -7.2 points in March. In April, a positive trend is also expected, albeit a minimal one: the indicator should rise to -7.0 points. As a rule, it has little effect on the dynamics of the pair, but if it deviates from the forecast level, it can cause a certain volatility. During the American session on Tuesday, we will find out the level of home sales in the US in the primary market. In contrast to the "secondary", this indicator has a more significant impact on the dollar. After a strong increase in January (+ 8%), in February the volume of sales of new buildings fell (+ 4%), and today negative dynamics is also expected, and, of a very significant nature: For the first time since October last year, the indicator may fall into the negative area, having reached 3%. Against the background of a half-empty calendar, this fact will put downward pressure on the US currency, allowing the pair bulls to withdraw to a short-term correction, reaching -3%.

On Wednesday, the European currency will react to the dynamics of the German indicator of business environment conditions from the IFO. This indicator is a good addition to the already published reports from ZEW and PMI. It is worth recalling that the sentiment index in the business environment of Germany from the ZEW institute (which was published last week) came out of the negative area for the first time in 11 months, demonstrating a significant increase - up to 3.1 points. But PMI indices turned out to be very controversial: in the German manufacturing sector, the indicator showed a minimal increase of up to 44.5 points (thus remaining below the key 50th mark), and in the service sector it rose to 55.6. Germany's composite PMI also turned out to be better than expected, being at around 52.1. If this week's IFO figure confirms positive momentum, then the single currency will receive some support. According to forecasts, the indicator should rise to 99.9 points. 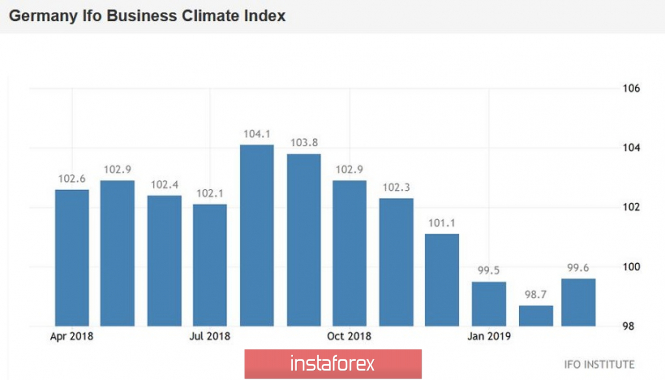 On Thursday, the economic calendar for the eur / usd pair is almost empty. Of interest is perhaps the Economic Bulletin of the ECB. This document is published 2 weeks after the meeting of the regulator which has a limited impact on the pair. During this time, traders could repeatedly hear not only Mario Draghi, but also other representatives of the European Central Bank. However, this ECB protocol is interesting in another aspect. So, according to American journalists, some members of the European regulator do not share the opinion of their colleagues about the recovery of the eurozone economy in the second half of this year. In their opinion, the economic forecasts of the Central Bank are too optimistic, since the slowdown in China's key indicators and the ongoing trade conflicts will continue to have a negative impact on the growth dynamics of Europe. They also questioned the accuracy of the forecast models that are used by the regulator - in their opinion, this model gives a distorted picture and does not fully take into account the revised macroeconomic indicators. This information, which was published last week, alarmed market participants. If the ECB protocol confirms their concerns, the euro will be under considerable pressure, because if the regulator suddenly reconsiders its forecasts and / or the formula for calculating the forecasts, then the approximate period of the rate increase can be postponed to a later date. There are alarmed market participants.

At the end of the trading week we will have an important release:

we will learn a preliminary assessment of the growth of the American economy in the first quarter of this year. Let me remind you that in the second quarter of last year, US GDP reached its peak (4.2%), after which it began to decline gradually. . In the 4th quarter of 2018, it came out at the level of 2.2% - and according to the forecasts of most experts, in the first quarter of this year the American economy will show a similar result. If the real numbers do not coincide with the forecast, then the dollar will fall into the zone of price turbulence - especially if the result is below expectations. In this case, the rhetoric of Fed members may soften again, and the question of lowering the rate will again be on the agenda (at least in the mouth of many politicians and some representatives of the Federal Reserve). Also pay attention to the price index of GDP - according to forecasts, it should decrease significantly (from 1.7% to 1.3%). This fact may have a strong pressure on the dollar, even if GDP growth will be at the forecast level. 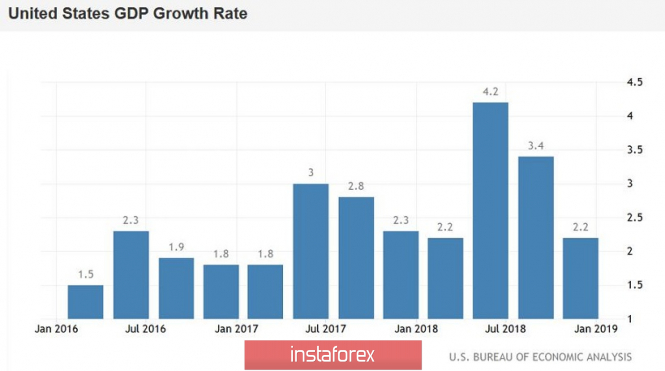 In addition to macroeconomic reports, eur / usd traders will monitor the negotiation process between Beijing and Washington (another round of negotiations will begin this week) and the behavior of North Korea, which unexpectedly conducted military tests last week. External fundamental background will play an important role for the pair.

From a technical point of view, eur / usd bulls need to be kept above the support level of 1.1190 (the bottom line of the Bollinger Bands indicator on the daily chart) in order to avoid stalling to the bottom of the 10th figure. If buyers exceed the level of 1.1280, they will turn the tide in their favor and will be able to return the price to the area of the 13th figure.

The material has been provided by InstaForex Company - www.instaforex.com
EUR / USD: main events of the trading week