EUR / USD: plan for the US session on April 4. ECB protocols are not surprised. The market is completely calm

To open long positions on EURUSD you need:

Statements that the ECB could adjust its policies if necessary led to a decline in the euro in the morning. At the moment, only a breakthrough above the resistance of 1.1248 will allow to form a new upward wave with the update of the highs in the area of 1.1270 and 1.1294, where I recommend fixing the profits. In the scenario of a further decline in the euro in the afternoon, it is best to consider new long positions if a false breakdown is formed in the support area of 1.1218, which can be formed after data on the US labor market, or to rebound from the lower border of the side channel in the area of 1.1186.

To open short positions on EURUSD you need:

The bears have shown themselves in the area of resistance 1.1248 and again formed a downward wave in the euro. As long as trading will be conducted below this range, we can expect pressure to remain, which will lead to an update of the middle of the wide side channel of 1.1218, as well as its lower limit of 1.1186, where I recommend fixing the profits. When the growth scenario is above 1.1245 in the second half of the day, it is best to consider short positions to rebound from the resistance of 1.1269 and 1.1294.

Trading is conducted in the area of 30-day and 50-medium moving, which indicates the lateral nature of the market.

Only a breakthrough of the upper border of the Bollinger Bands indicator around 1.1248 will strengthen the upward movement in euros. 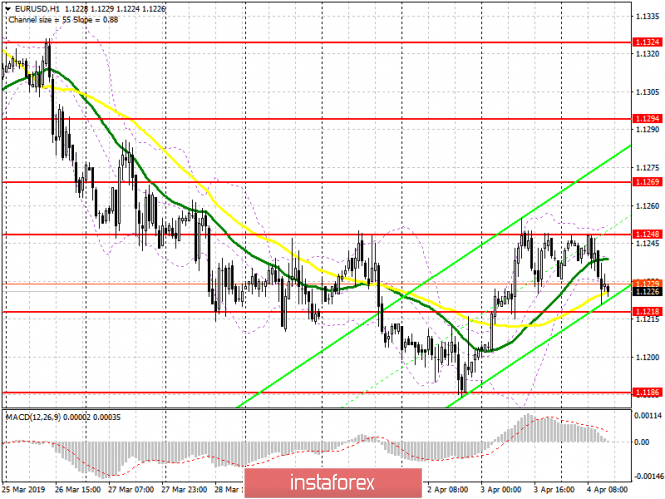 The material has been provided by InstaForex Company - www.instaforex.com
EUR / USD: plan for the US session on April 4. ECB protocols are not surprised. The market is completely calm