Euro saw through a liar

The publication of the minutes of the ECB March meeting and the release of data on the US labor market was to wake up the EUR/USD pair, which spent almost the entire week near the base of the 12th figure. Alas, neither the information that some members of the Governing Council would like to hold rates at current levels, at least until March 2020 nor the growth of employment outside the agricultural sector above the forecasts of Bloomberg experts did not help the "bears" in the euro.

To be fair, we must admit that the statistics on the American labor market were mixed. Yes, non-farm payrolls did not scare investors, but the slowdown in the growth of average wages from 3.4% to 3.2% was an unpleasant surprise for fans of the US dollar. If wages are not accelerated, should we expect exploits from consumer prices? Perhaps Donald Trump is right, and in the conditions of sluggishly growing inflation, the Fed should not have raised the rate in December? The topic of criticism of the President has become a frequent guest on the front pages of the world media. The owner of the White House reproached the Central Bank for excessive activity, argued that if not for monetary restriction, stock indices and GDP would have been higher and the budget deficit is smaller. His chief economic adviser Larry Kudlow urged the Fed to reduce the rate by 50 bp.

At the same time, Jerome Powell repeatedly stressed the apolitical nature of the regulator, and representatives of the FOMC do not exclude the possibility of continuing the cycle of normalizing monetary policy this year. Against this backdrop, the ECB's concerns about a slowdown in eurozone GDP growth, Brexit and trade wars could be a catalyst for the peak of EUR/USD.

Despite the fact that most (16 out of 21) Bloomberg experts believe that as a result of LTRO, the European debt market rates will fall (that is, the long-term refinancing program is a weakening of monetary policy and a "bearish" factor for the euro) the main currency pair at around 1.18 by the end of the year. This is less than 1.2 (this figure appeared in the January and February forecasts), but 6 figures higher than the current levels. The main drivers of growth are fiscal stimulus and stabilization of the eurozone banking system.

The impact of LTRO on eurozone debt market rates 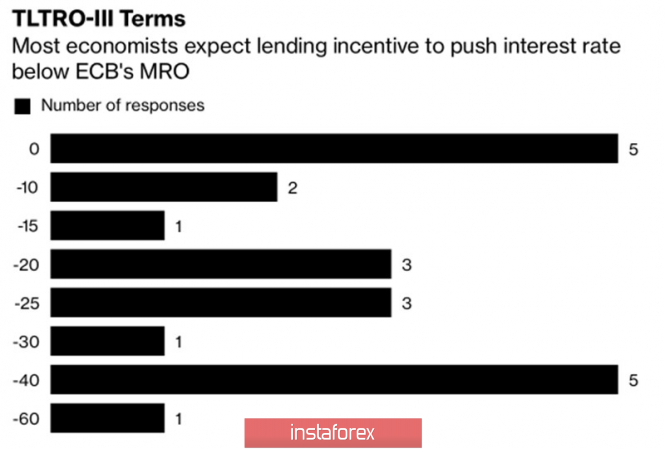 The key events of the week by April 12 will be the release of data on US inflation and European industrial production, the publication of the minutes of the March Fed meeting and, of course, the meeting of the Governing Council of the ECB. In my opinion, since the last meeting of the Central Bank, the situation in the economy of the currency bloc has improved somewhat, which makes it possible to count on the attack of the "hawks". First, the United States and China are on the verge of signing a trade agreement. Secondly, data on European business activity were better than expected. Third, the political landscape in Britain is improving.

Technically, if EUR/USD bulls manage to return the pair's quotes within the medium-term consolidation range of 1.125-1.15, the second false breakdown of its lower limit in a month will indicate the weakness of their opponents.

The material has been provided by InstaForex Company - www.instaforex.com
Euro saw through a liar