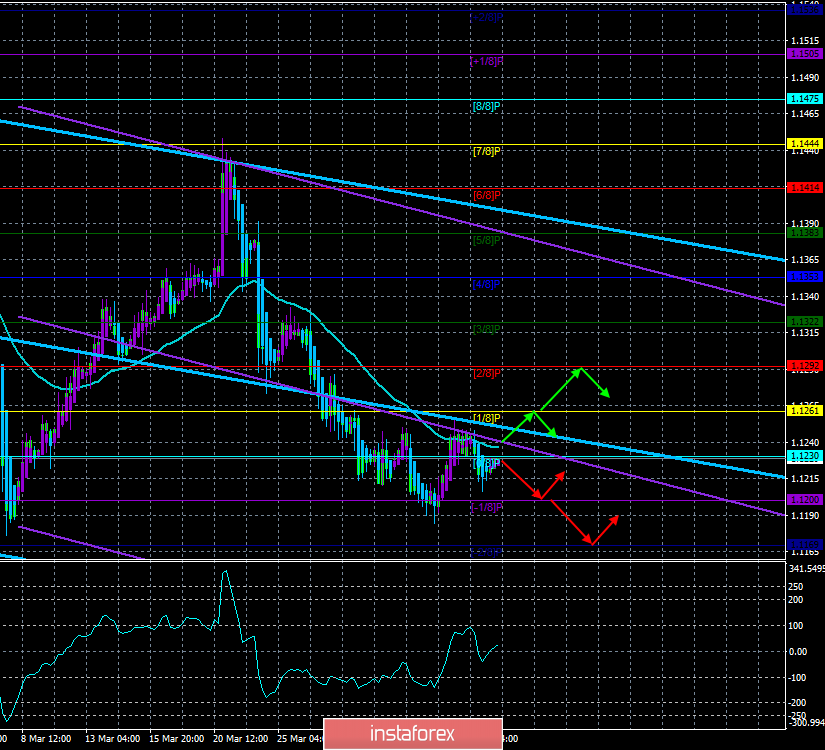 The EUR/USD currency pair resumed its downward movement on Friday, April 5, and also failed to overcome the moving average line. Yesterday was "empty" in terms of macroeconomic reports. Thus, traders resumed selling the euro precisely against the background of a lack of fundamental support for the European currency. Important releases in the United States are scheduled on the last trading day of the week. First, there will be a report on the number of new jobs created outside the agricultural sector. After the failure of the previous report (20k), the March value should be much higher. The forecast is 180k. However, the real value may differ from the forecast, and depending on which way it will differ, the reaction of traders will also be different. Secondly, there will be a report on the change in the average wage for March. An increase of 3.4% is expected. These two reports can greatly affect the movement of the pair. For the euro, on the basis of yesterday's and the day before yesterday's trading, the main chance lies in the weakness of the designated reports. In this case it will be possible to count on a strengthening of the euro currency. But from a technical point of view, it will be difficult for the pair to overcome the Murray level of "-1/8" - 1,1200 - this is the lower limit of a strong support zone, which the pair cannot overcome for several months.

The EUR/USD currency pair has resumed its downward movement. Thus, it is now recommended to consider trading for a decline with targets of 1,1200 and 1,1169, before the new upward turn of the Heiken-Ashi indicator.

Buy positions are recommended to be considered not earlier than when traders have overcome the moving average line with targets of 1.1261 and 1.1292. In this case, the trend for the instrument will change to an upward one, and the euro will have a small chance of strengthening.

The higher linear regression channel is the blue lines of unidirectional movement.

The lower linear regression channel is the purple lines of unidirectional movement.

The material has been provided by InstaForex Company - www.instaforex.com
EUR/USD. 5th of April. Trading system "Regression Channels". All focus on NonFarm Payrolls and US Payroll Report