EUR/USD. April 10th. Results of the day. Mario Draghi's rhetoric was predictable, and US inflation accelerated 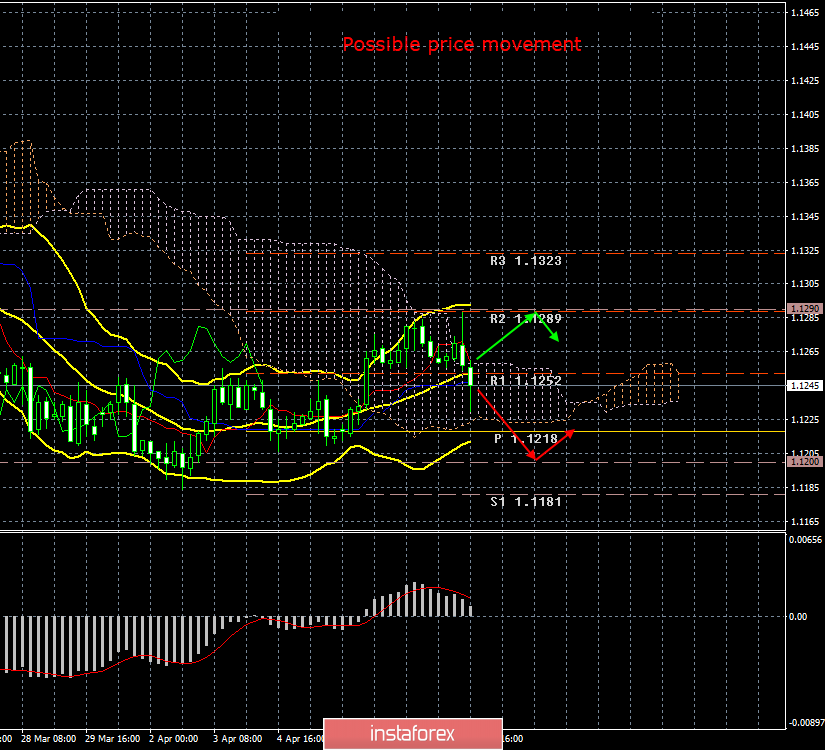 The EUR/USD currency pair began to decline following the results of the ECB meeting and Mario Draghi's speech. As expected, monetary policy remained unchanged, and the ECB head's speech was extremely restrained. For example, not a word was said about the LTRO program. However, Draghi still reported that downside risks to the economy will persist, although some negative factors have weakened their influence. The period of low interest rates will remain at least until the end of 2019, and the proceeds from the redeemed bonds purchased under QE will be reinvested. Regarding inflation, Draghi said that in the near future it could slow down even more. Now the markets are waiting for the minutes of the last Fed meeting, which will be released in the evening, although it is unlikely that there will be radically new information on monetary policy. In the United States, the report on inflation has already come out, which, quite expectedly, turned out to be better than the forecast values. US inflation in March amounted to 1.9% y/y, while in monthly terms it accelerated to 0.4%. This is also a factor that will play into the hands of the US currency. However, we also note the fact that the euro's decline and the dollar's rise after all this news cannot be called strong or even significant. Thus, it seems that, despite the information, which is interpreted unequivocally in favor of the US dollar, market participants are still afraid to sell the pair at such low price values. This means that the level of 1.1200 still holds back the European currency from new falls.

The EUR/USD pair has started to adjust against the weak uptrend. Thus, orders for buying small lots with a target of 1.1289 are now relevant, but after the completion of the current round of correction.

Sell positions are also recommended to be considered in very small lots with a target of 1.1181, if the pair consolidates below the Kijun-Sen line. We remind you that the support level of 1.1200 is very strong and the tool may not fall below it.

The material has been provided by InstaForex Company - www.instaforex.com
and US inflation accelerated EUR/USD. April 10th. Results of the day. Mario Draghi's rhetoric was predictable