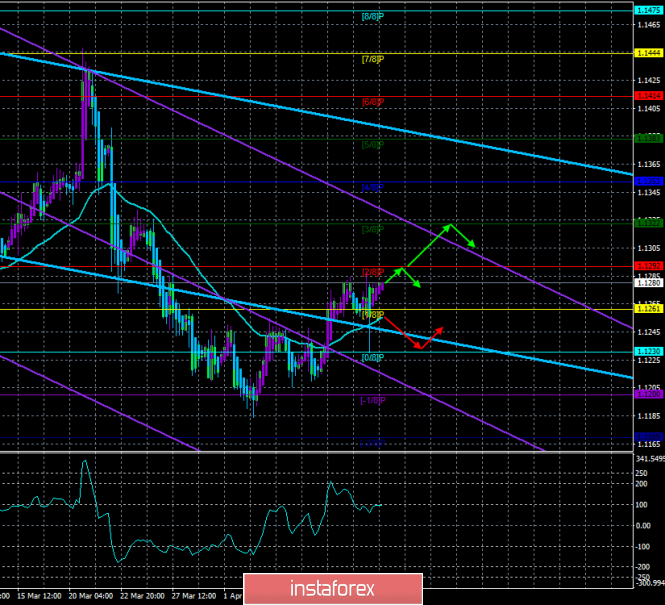 On Thursday, April 11, the currency pair EUR/USD returned to its original positions after a decline to Murray's level of "0/8" during yesterday's trading. The Fed's evening minutes, as expected, did not contain fundamentally new information. The regulator, as it has done many times before, noted that in 2019 he does not plan to raise the rate. Much more interesting was the statement by US Vice President Mike Pence. He said that in order to stimulate GDP growth, the key rate should be lowered. Earlier, US President Donald Trump has repeatedly criticized the Fed and Jerome Powell for raising rates too fast. In his opinion, this hinders the economic growth of the country, as well as complicates the process of servicing the public debt, since during the entire period of the rate hike the dollar was prone to growth. Today, neither the States nor the European Union has planned important macroeconomic events. Thus, based on the readings of the system "regression channels", we conclude that the upward trend, albeit weak, is maintained, and the indicator Heiken Ashi signals a local upward movement. Volatility on the instrument may return to low values today.

The EUR/USD currency pair has resumed its upward movement. Thus, it is now recommended to consider purchase orders with targets at 1.1292 and 1.1322. A new turn of the Heiken Ashi down indicates a new round of downward correction.

It is recommended to open short positions not earlier than re-fixing the pair below the moving with the objectives of 1.1230 and 1.1200. In this case, the downward trend in the pair may resume.

The material has been provided by InstaForex Company - www.instaforex.com
EUR/USD. April 11th. The trading system "Regression Channels". Mike Pence: the key rate should be lowered