EUR/USD. April 15th. Results of the day. The trade war between the EU and the US is gaining momentum 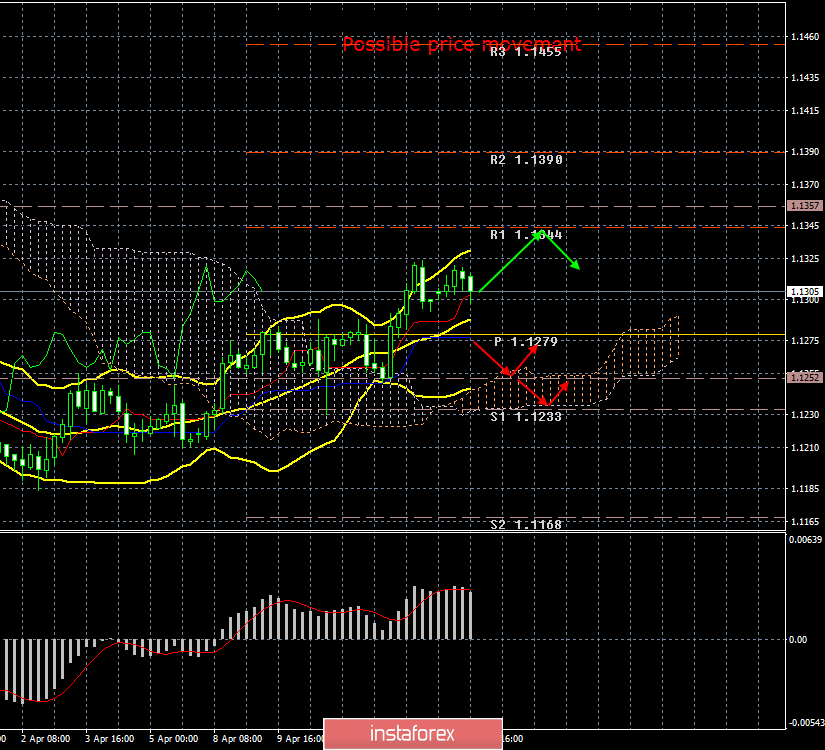 The first trading day of the week for the EUR/USD pair ended with low volatility and multidirectional movements. Last Friday, the pair quite unexpectedly soared upwards, however, the European currency did not have any fundamental support. Therefore, such a growth from the euro, although logical from a technical point of view, is not logical from a fundamental one. Moreover, in recent days a trade conflict has clearly flared up between the EU and the United States. The prerequisites for its occurrence appeared long before that, as Trump believes that all the other countries that have trade relations with the United States are being "unfair to America." However, earlier, Trump was occupied by China and the sanctions that go along with it. Now, a list of goods that will be taxed has been prepared. A list of European goods. Quite expectedly, the European Commission has prepared its list of goods for the same amount ($11 billion). Thus, in the near future, these duties may start to take effect. However, looking a bit into the future, there is reason to assume that the US will simply introduce more and more new duties in response to the EU's response, as was the case with China. Given the much weaker state of the European economy compared to the US, again, we can assume that the European Union will have to sit down at the negotiating table with Trump sooner or later. So far, the euro is not responding to this news, but it may begin to react, and, most likely, traders will take the side of the US dollar. From a technical point of view, the correction has now begun, but the MACD indicator can move down at this moment.

The EUR/USD pair adjusted at the beginning of the new week. Thus, it is recommended to open new longs no earlier than the completion of the current correction with a target of 1.1344. The pair's volatility remains low.

Sell positions are recommended to be considered in small lots with targets at 1.1252 and the Senkou Span B line no earlier than when you consolidate the price below the Kijun-Sen line. An escalation of the trade war between the EU and the US could lead to overcoming the level of 1.1200 in the future.

The material has been provided by InstaForex Company - www.instaforex.com
EUR/USD. April 15th. Results of the day. The trade war between the EU and the US is gaining momentum