EUR/USD. April 16th. Results of the day. The pair is waiting for a report on inflation in the European Union 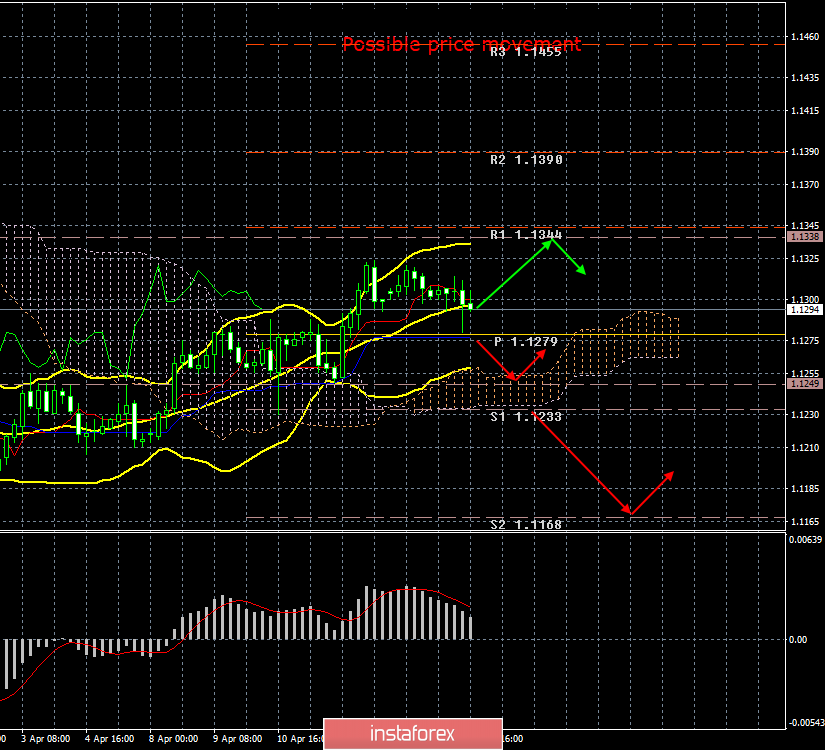 The EUR/USD pair ends the second trading day of the week with a downward correction to the critical line against a weak uptrend, which still persists. The rebound in prices from the Kijun-sen line could trigger a resumption of the upward movement, which is likely to remain extremely weak, given the lack of fundamental support for the euro currency. Today, a report on industrial production in the United States was released, which, as it turned out, declined by 0.1% in March against the forecast of +0.2% m/m. However, this did not prevent the US currency as a whole to rise in price. Thus, the instrument's trend, as already mentioned, will still be growth while volatility continues to be extremely low. Therefore, in any case, it is extremely difficult to trade with such movements. As for the forecast for the EUR/USD pair, now we can say one thing: without strong fundamental reasons, it is very difficult to expect a sharp increase in volatility. Daily movements of about 20-40 points do not add to the desire of traders to open long-term and medium-term positions. Although the flat itself is absent, trading the pair now is extremely unappealing. A report on inflation in the EU will be published tomorrow, which could have an impact on the pair. However, no one is waiting for a strong value of the consumer price index, so it is unlikely for the euro to receive support once again. Based on this, we expect the US dollar to grow more. And the consolidation of the pair below the critical line will indicate a change in the technical trend to a downward one.

The EUR/USD pair continues to adjust at the beginning of the new week. Thus, it is recommended to open new purchases of the pair in the event that the price rebounds from a critical line with a target of a resistance level of 1.1338.

Sell positions are recommended to be considered in small lots with targets at 1.1249 and the Senkou Span B line has not initially been overcome below the Kijun-sen line. The theme of the trade war is now having a very indirect effect on the pair, but this may change in the future.

The material has been provided by InstaForex Company - www.instaforex.com
EUR/USD. April 16th. Results of the day. The pair is waiting for a report on inflation in the European Union