EUR/USD. April 16th. The trading system "Regression Channels". The European Union is ready to sit down at the negotiating 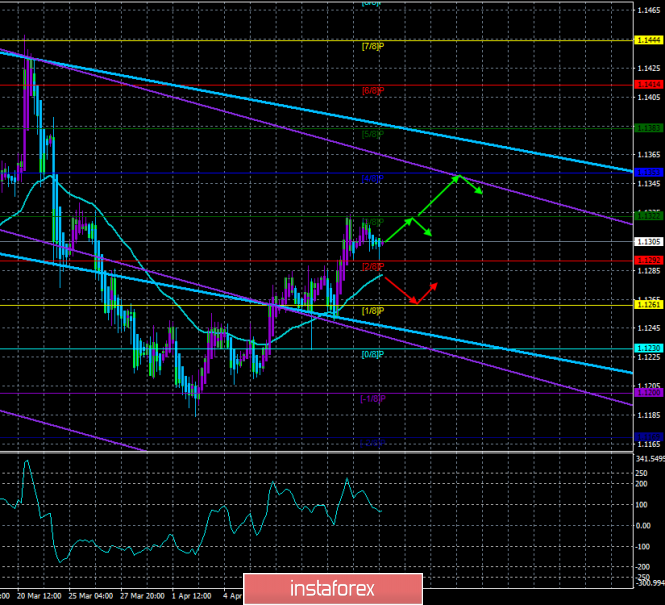 On Tuesday, April 16, the currency pair EUR/USD began a new round of corrective movement against the upward trend, as it could not overcome the Murray level of "3/8" - 1.1322. The blue bars of the Heiken Ashi indicator indicates local downward movement. Turning the indicator upwards will mean another third attempt to overcome the indicated level. However, as we have said in previous reviews, the growth potential of the European currency is small. From today's macroeconomic reports, only industrial production for March in the USA will be interesting for the pair. A 0.2% increase is expected, and any value above this figure will be in favor of the American currency. The main topic for the EUR/USD pair is now considered to be an emerging trade war between the US and the EU, which, however, does not have a strong influence on the preferences of traders. However, it may begin to render in the future. We did not have time yesterday to write that in the event of an escalation of the trade conflict, it will clearly not be in favor of the European Union, and that Brussels will most likely try to sit at the negotiating table as soon as possible, as today there is information that the EU Ministers of Agriculture want to negotiate with Washington in order to avoid a trade war. Thus, in the near future, we can expect negotiations between the United States and the alliance.

The EUR/USD currency pair is once again being adjusted. Thus, it is now recommended to consider long positions with targets at 1.1322 and 1.1353, but after the completion of the current round of correction, which will be indicated by the Heiken Ashi indicator turning to the top.

It is recommended to open a sell position no earlier than fixing a pair below the moving with targets at 1.1261 and 1.1230. But the potential downward movement will still be limited to the level of 1.1200.

CCI - the blue line in the indicator window.

The material has been provided by InstaForex Company - www.instaforex.com
EUR/USD. April 16th. The trading system "Regression Channels". The European Union is ready to sit down at the negotiating