EUR/USD. April 18th. The trading system "Regression Channels". The euro under the influence of the news may start falling 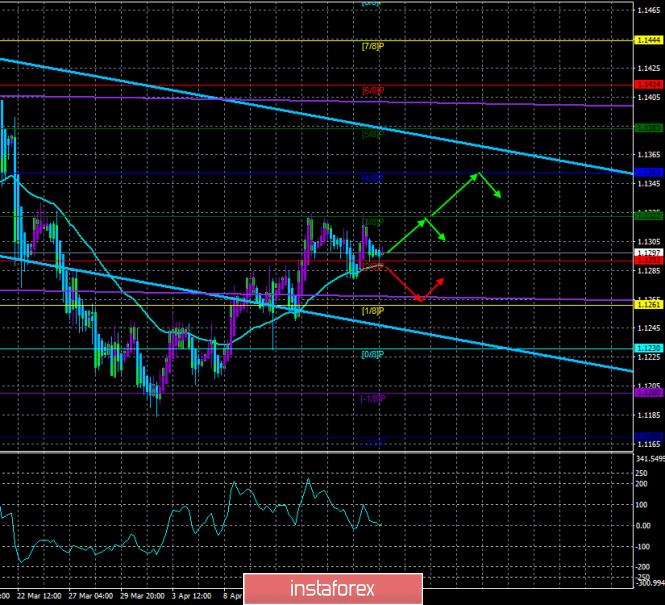 The currency pair EUR/USD on Thursday, April 18, once again fulfilled Murray's level of "8/8" - 1.1322, failed to overcome it and lowered to the moving average line. At the same time, the upward trend in the pair persists, although it remains rather weak. Today in the eurozone and America, a sufficiently large number of macroeconomic reports will be published, but most of them will be insignificant. For example, as many as 6 reports on business activity indices in the fields of production and services of the EU and the USA. However, these are only preliminary values for March, and not final. Thus, they will only understand what the final values can be expected from these indicators. For example, the EU Markit business index in the manufacturing sector has already dropped below 50, which means a negative trend. All three US indices continue to be above 50. Also today there will be several reports on US retail sales. All indicators are expected with a significant increase compared with the previous period. Thus, the likelihood that today it is the US dollar that will receive support from the fundamental data is very high. Thus, as a forecast, it can be assumed that today there will be a closing below the moving average. By the way, three rebounds from the level of 1.1322 speak in favor of this. Now this level looks like the maximum rate that EUR/USD could reach in the current conditions.

The EUR/USD currency pair has begun another round of correction. Thus, it is now recommended to consider long positions with targets at 1.1322 and 1.1353, but after the completion of the current correction and if the price remains above the moving average.

It is recommended to open sell orders no earlier than fixing the pair below the moving average with targets at 1.1261 and 1.1230. But the potential downward movement will still be limited to the level of 1.1200.

The material has been provided by InstaForex Company - www.instaforex.com
EUR/USD. April 18th. The trading system "Regression Channels". The euro under the influence of the news may start falling