EUR/USD. April 23rd. Results of the day. The euro currency has once again dropped to 1,1200 and may rebound again 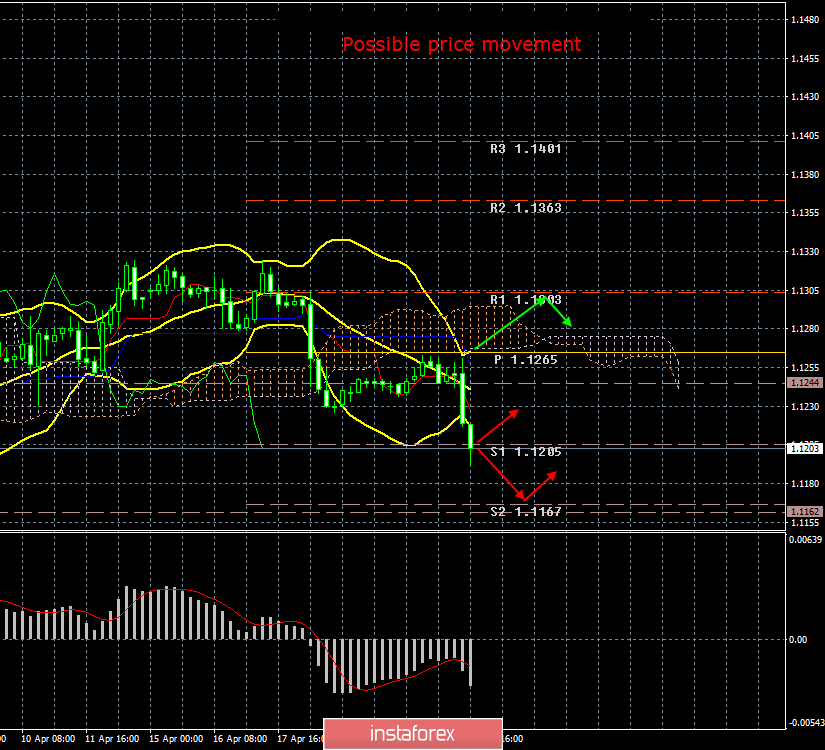 The EUR/USD pair ends the second trading day of the week with a downward movement of 40 points, although everything looks much more convincing in the illustration. However, in reality, even 40 points per day is quite a lot for the euro, considering the volatility of the previous two days (19 and 27 points). The strengthening of the dollar, therefore, can not even be called strong. That is, such a movement could have been triggered by 1-2 major players entry into the market. Given the fact that there were no significant macroeconomic publications today, and the growth in oil prices could not provoke a rise in the dollar against the euro, then most likely it was. From a technical point of view, the downward trend in the EUR/USD pair has been preserved, but it cannot be called an increase. The MACD indicator has turned down, indicating a resumption of the downward movement. However, most importantly, the pair has once again fulfilled the level of 1,1200 and again (!!!) could not overcome it. Thus, the probability of a price rebound from this level with the subsequent departure to the area of 13 and even 14 figures is very high. If the bears can still break this level then you can count on the continuation of the downward trend and increased movement. Tomorrow, by the way, there will again be no significant macroeconomic publications either in the EU or in the USA. Thus, the bears will have to try very hard to pass the level of 1,1200 without fundamental support. Most likely, a rebound from the indicated level will follow.

The EUR/USD pair resumed its downward movement and completed the level of 1.1200. Most likely, there will be another rebound from this level, since the bears have no fundamental support. If this level is still passed, the targets for the shorts will be 1.1167 and 1.1162.

Buy positions are recommended to be considered in small lots for a resistance level target of 1.1303 not earlier than when the price is consolidated above the Kijun-Sen line. In this case, the initiative will go into the hands of bulls for some time.

The material has been provided by InstaForex Company - www.instaforex.com
1200 and may rebound again EUR/USD. April 23rd. Results of the day. The euro currency has once again dropped to 1