EUR/USD. April 23rd. The trading system "Regression Channels". The prospects for the euro are almost unequivocal – down 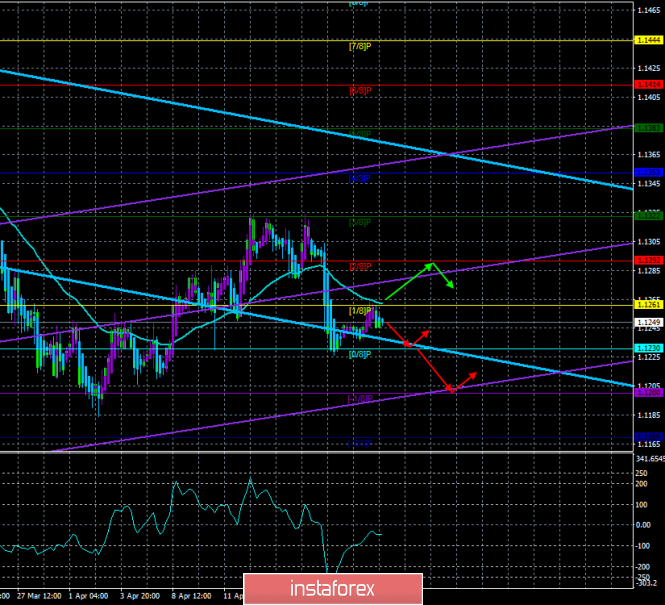 On Tuesday, April 23, the currency pair EUR/USD adjusted to the moving average line but failed to overcome it. As we wrote the day before, no important macroeconomic reports have been made available to traders in recent days. Thus, the fundamental factor of trading was simply absent on Friday and Monday. Today, the situation will not change at all, the calendar of macroeconomic events is still empty. Thus, based on clean technology, today we expect a resumption of the fall, as the MA has not been overcome. As for the future prospects of the euro currency, they remain vague. There are still no deep fundamental factors that could support the euro. Moreover, the threat of a trade war with the States does not add confidence to the euro. So far, the further mutual threats have not gone, however, knowing Donald Trump, there is reason to believe that he will not stop halfway through. Thus, the EU will have to sit at the negotiating table and, most likely, make serious concessions to the United States. That, of course, will not have a positive impact on the state of the economy, which is already experiencing not the best moments. Thus, we still believe that the euro will sooner or later overcome the important level of 1.1200, which will determine its future.

The EUR/USD currency pair is trying to resume a downward movement. Thus, now it is still recommended to consider short positions with targets at 1.1230 and 1.1200. The reversal of the Heiken Ashi indicator to the top is very likely near the target levels.

Buy positions are recommended to open no earlier than the consolidation of the pair above the moving average with targets at 1.1229 and 1.1322. The calendar of macroeconomic events today is empty, so volatility can remain low.

The material has been provided by InstaForex Company - www.instaforex.com
EUR/USD. April 23rd. The trading system "Regression Channels". The prospects for the euro are almost unequivocal – down