EUR/USD. April 4. Results of the day. For a long time forces in opposition to the dollar, the euro was not enough 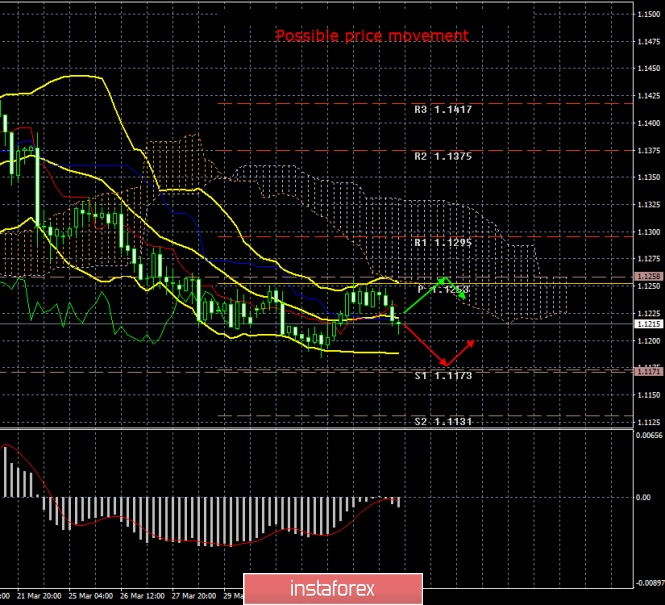 The European currency paired with the US dollar on the penultimate trading day of the week once again rushed down. Once again, we observe a serious decline in volatility to a minimum. The euro was unable to develop the success achieved yesterday. It seems that traders have resumed the restrained sales of the EUR/USD pair. No important macroeconomic reports were published today either in the States or in the European Union. Thus, the obvious conclusion is that yesterday the pair has risen in price thanks to a whole set of macroeconomic reports in favor of the euro. Today, when the euro does not have fundamental support, the main movement has resumed. This means that in the near future, the pair can again start the test of the level of 1.1200, which this time can be successful, too little desire from traders to buy euros now. Also, from a technical point of view, the pair failed to reach even the lower border of the Ichimoku cloud during yesterday's growth, which once again indicates the weakness of the bulls. At the moment, the tool has already fixed below the critical line, which speaks in favor of resuming the downtrend. Thus, today or tomorrow, we can expect the pair to decline to the first support level of 1.1173 this week. If the pair confidently passes the level of 1.1200, then the way down will be open. As we can see, the strengthening of the euro requires serious fundamental support, which is now extremely rare.

The EUR/USD pair has completed the upward correction and is now trying to resume the downward movement. Thus, short positions with targets at 1.1173 and 1.1131 in small lots are relevant again.

Long positions are also recommended to be considered as small lots with targets at 1.1258 and 1.1295 if traders consolidate above the Kijun-Sen line again.

The material has been provided by InstaForex Company - www.instaforex.com
EUR/USD. April 4. Results of the day. For a long time forces in opposition to the dollar the euro was not enough