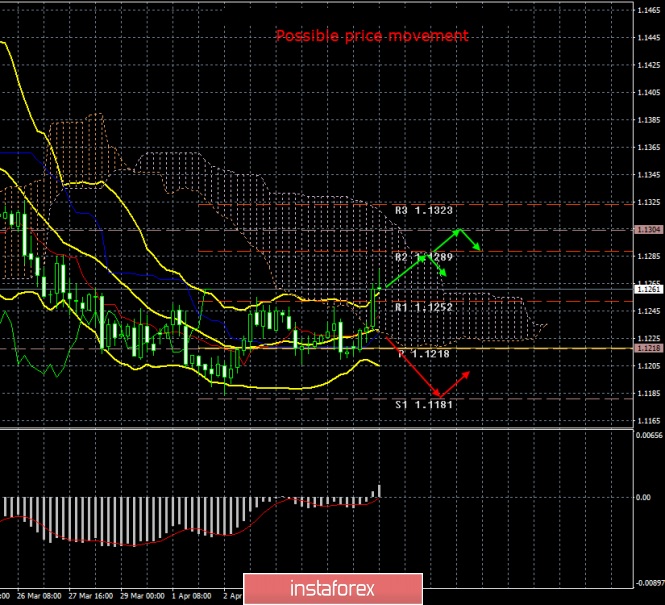 The first trading day of the week for the EUR/USD pair was surprisingly quite active. During the day, the pair scored about 50 points. On the chart, it looks like a strong enough upward movement, but in practice, it is only 50 points, which fully corresponds to the size of the average volatility for the last 5 days. Thus, from our point of view, nothing supernatural happened. We also state the fact that the pair once again failed to overcome the level of 1.1200. Although with each subsequent attempt, the chances of overcoming this level increase, yet everything remains in their places. No fundamental data have been received to date. The only report published today was American on production orders, which showed a decline of 0.5%. Unfortunately for the EUR/USD pair, it does not have such an inexhaustible theme as GBP/USD has (meaning Brexit). Thus, in general, the low volatility of the pair is not surprising. From a technical point of view, a new "golden cross" is being developed, which is weak, as the price is trading in the Ichimoku cloud. There are small chances for the strengthening of the European currency, but there is no fundamental basis for growth. Only technical, which are based just on the next unsuccessful attempt to get below the level of 1.1200.

The EUR/USD pair has started a new upward movement, which is still weak. Thus, purchase orders with targets at 1.1289 and 1.1304, but in small lots, are currently relevant, as the "golden cross" is weak.

Short positions are also recommended to consider small lots with the target of 1.1181 if the pair consolidates back below the Kijun-Sen line.

The material has been provided by InstaForex Company - www.instaforex.com
EUR/USD. April 8. Results of the day. The pair rebounded again from 1.1200 and can go up by 80-100 points