EUR/USD. April 9. The trading system "Regression Channels". The euro has a small chance of growth 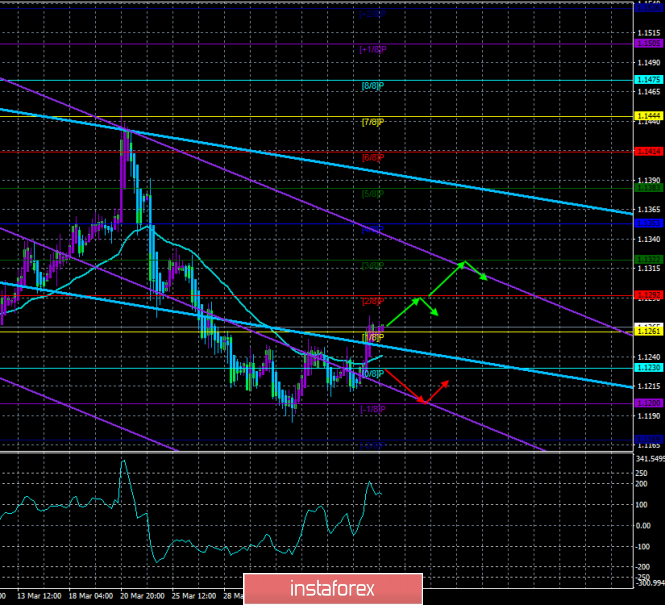 On Tuesday, April 9, the currency pair EUR/USD overcame the moving average line and thus began an uptrend. It would be possible to link this event with the upcoming ECB meeting if market participants could expect at least some positive information from the European regulator. However, nothing of the kind is expected from the Central Bank. According to many experts, inflation in the Eurozone is not only at a low level now but will remain so in the coming years. GDP growth rates are present, but again they are not too high. Some EU economies are on the verge of recession, and most recently the ECB announced the launch of a new LTRO program. Thus, according to the most optimistic forecasts, the regulator will begin to tighten monetary policy no earlier than next year. This is a very optimistic forecast. Accordingly, the main event will not be the results of the meeting, but a press conference at which we can hear any new information on monetary policy. As for today, no important macroeconomic reports are planned. Will the euro continue to strengthen in these conditions? It is hard to say. So far, the growth of the euro looks like a banal technical correction, and a rather weak one. Both linear regression channels clearly indicate the direction of the main trend.

The EUR/USD currency pair has started an upward movement. Thus, it is now recommended to consider trading for a raise with targets at 1.1292 and 1.1322, before the Heiken-Ashi indicator turns down.

Short positions are recommended to be opened not earlier than the reverse consolidation of the pair below the moving with the targets at 1.1200 and 1.1169. In this case, the downward trend in the pair may resume.

The material has been provided by InstaForex Company - www.instaforex.com
EUR/USD. April 9. The trading system "Regression Channels". The euro has a small chance of growth