EUR/USD: China and the United States on the verge of a deal, Britain asks to delay Brexit

Today, the euro-dollar pair shows a pronounced correctional growth. The correction is due to many reasons, and not all of them are related to the US currency. Good data on the growth of the PMI index in Europe, as well as encouraging news about Brexit prospects inspired EUR/USD bulls, after which the price moved away from the level of annual lows. Although there are no prerequisites for a large-scale recovery of the pair, today's dynamics suggests that the downward path is also given to the bears with great difficulty. In addition, many experts warn that the pair has formed a low around 1.1180, so short positions in this price area are quite risky. 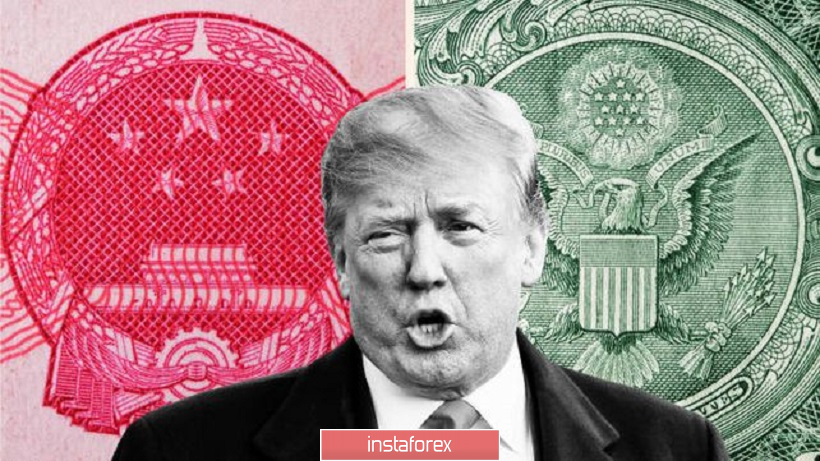 The main driving force behind the EUR/USD's growth for today has become the external fundamental background: China and Brexit. Macroeconomic statistics now plays a minor role, but today's PMI figures in the services sector looked too contrasted relative to similar indicators in the production sector. Let me remind you that at the end of March, indicators of production growth in key EU countries turned out to be much worse than expected, that they put strong pressure on the single currency. Today there is a mirror situation. In particular, the German index is gradually increasing since December of last year, being above the 50th mark, which indicates growth in production. In February, this figure unexpectedly jumped to 55.3 points, which surprised the market a lot, and continued to grow in March. And although today there was a slight increase relative to the previous month, the trend speaks for itself. In France, the situation is somewhat worse. In December, the French business activity index fell below the 50 mark, registering the deteriorating situation in the services sector. And this month, it also remained below the key target - but - contrary to the pessimistic forecasts of experts, the indicator showed a modest increase to 49.1 points.

But Spain and Italy were surprised by the erratic growth of the index: the Italian figure rose by three points at once (from 50.4 to 53.1), and the Spanish - by two points (from 54.5 to 56.8 points). In the euro area as a whole, business activity in the services sector increased by five tenths of a point relative to the February values, exceeding the forecasts of most experts. The market managed to break the habit of any positive news from the eurozone, so today's release provided indirect support for the single currency. Moreover, the American counterpart of this index (the ISM index for the non-production sphere) is much worse than expected today: instead of the projected increase of 58 points, it barely reached 56: this is the worst result since last July. The dollar index slumped again to 96.6 points, making it possible for the EUR/USD pair to remain in the middle of the 12th figure. 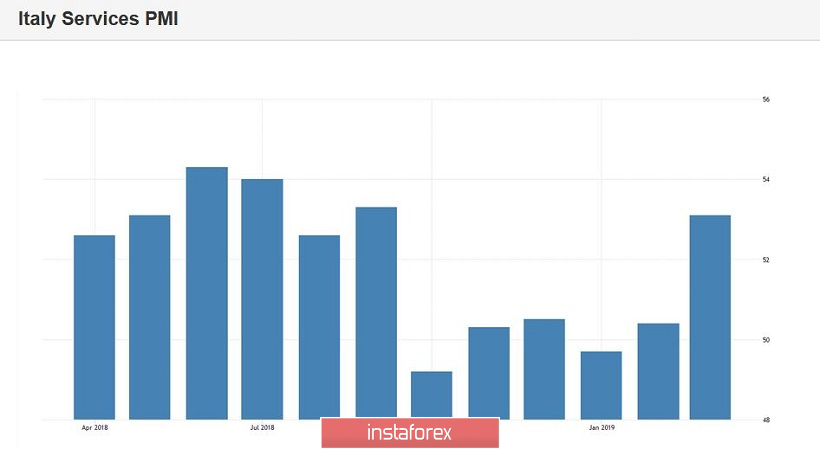 And yet the main springboard for the pair's corrective growth has become, I repeat, the external fundamental background. Today, in one of the most influential American publications, an article was published under a blaring headline: "The United States and China have almost agreed on a trade deal." According to the information of journalists, the countries are very close to concluding a historic agreement, however, there are still unresolved issues, and a contact group of negotiators are working on it. In particular, we are talking about the requirement of Beijing to remove US duties worth $250 billion.

Washington refused to comply with this request, and now the parties are working on a scenario of gradually easing sanctions pressure. The White House, in turn, wants China to guarantee fulfillment of the agreements reached. According to the interlocutors of the publication, it is quite difficult to create such a mechanism, and at the moment there is no solution to this problem. Summarizing the above, informed sources concluded that the transaction is 90% ready, but the remaining uncoordinated issues are the most complex. According to insiders, if these issues are agreed, then the leaders of China and the US can sign a deal in the coming weeks. Otherwise, the negotiation process will be extended at least until July.

But the market did not go into the details and jumped at the encouraging headline. The dollar index has stopped its growth, and the risk appetite has increased in many ways. The fundamental picture of the day was supplemented with news regarding Brexit prospects. And although it is still far from being final, the subtotals allowed traders to take a breath. "Hard" Brexit is not on the agenda again: the British prime minister is trying to get further delay in order to conclude a political agreement with the Laborites. If the parties agree on leaving the country as part of the EU customs union, then the softest version of Brexit will be realized.

And although such a scenario actually looks unlikely, traders were optimistic about this turn of events. Now the main actions will take place in Brussels, where the leaders of the European Union countries will decide whether to give the British one more chance to force them to participate in the elections to the European Parliament. According to preliminary data, representatives of many EU countries are against a short-term delay. But negotiations on this issue have just begun, so their results are difficult to predict. However, for the single currency in this context, another thing is important: the probability of implementing hard Brexit on April 12 has decreased greatly, which allows EUR/USD bulls to switch to other fundamental factors.

Technically, the pair's situation has not changed. For bulls, it is important not to fall below the bottom line of the Bollinger Bands indicator on the daily chart (1.1180), while the bears have the opposite task – to gain a foothold in the 11th figure. If the sellers do not have enough strength to decline, then a corrective pullback to the boundaries of the 13th figure is quite likely, where the middle line of the Bollinger Bands indicator coincides with the Tenkan-sen line on the daily chart.

The material has been provided by InstaForex Company - www.instaforex.com
Britain asks to delay Brexit EUR/USD: China and the United States on the verge of a deal