The second week of April promises to be saturated: upcoming events can affect not only the euro/dollar pair, but also other currency pairs, changing the overall fundamental picture. Increased volatility is expected in the market, as traders will monitor events not only of political, but also macroeconomic nature. The "hottest" will occur in three days - from Tuesday to Thursday. Therefore, today we can calmly assess the situation on the market and weigh the existing risks.

The calendar of the current week can be divided into two parts. The first category includes the Brexit and the US-China trade negotiations. The second category is the most important macroeconomic reports, the minutes of the Fed meeting and the ECB meeting. In other words, traders will evaluate the monetary policy prospects of the ECB and the Federal Reserve against the backdrop of political fights around Brexit and a trade deal between the US and China. Such a "bunch" of fundamental factors makes it difficult to predict the EUR/USD's situation, since unexpected statements, numbers or decisions can turn the price movement by 180 degrees, with lightning speed. Therefore, traders have no choice but to build a plan on the basic scenarios of the upcoming events, while retaining hopes that the most likely scenario will be realized. So, first things first. 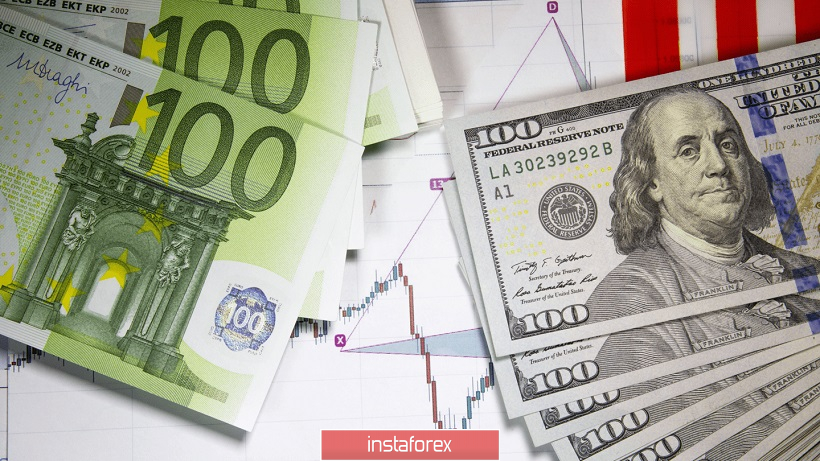 Brexit has an indirect impact on the EUR/USD pair, but at the key stages of the divorce process, the euro follows the pound - therefore, the results of the EU summit, which will be held on April 10, is important for the pair. According to preliminary data, Theresa May will ask for a delay until May 22 or June 30, but eventually will agree to the "flexible delay" proposed by Donald Tusk for a year. Under this scenario, Britain will participate in the elections to the European Parliament and work on the approval of the transaction throughout the year. If this can be done ahead of time, then the British will announce it, initiate the EU summit, and the Alliance "releases" London. The deputies of the European Parliament from Britain add their powers. According to rumors, Theresa May will approve this idea, the only question is whether the rest of the EU leaders will support the Tusk initiative. There is an intrigue here.

The intrigue remains regarding the prospects of the US-China relations. Last week, Donald Trump made a rather ambiguous statement: on the one hand, he acknowledged the progress in the negotiations (and even announced the signing of the deal this month), on the other hand, he reported continuing differences over "issues of duties on goods and intellectual property. " The fact is that these issues were initially the most difficult to resolve, so if the parties stalled on them, then it's premature to even talk about a deal. But if by this week, Washington or Beijing signals a breakthrough in the negotiation process, risk appetite in the market will increase in many ways: the dollar will sink, and the EUR/USD pair respectively, will receive a reason for its growth.

If we talk about the publication of the minutes of the Fed and the April meeting of the ECB, these events can significantly affect the pair's dynamics under one condition - if representatives of the regulator raise the issue of an interest rate reduction. Such hypothetical perspectives are widely discussed by experts - especially after the disappointing data on the growth of European inflation (as well as inflation in the US) and the slowdown of the global economy as a whole. Of all the central banks of the leading countries at the moment, the RBNZ is the only one that openly hinted at a possible rate cut this year. The rest of the central banks took a wait and see position, not jumping to conclusions. In my opinion, the Fed and the ECB will not take hasty decisions, refraining from making loud statements. In this case, the Fed's minutes will have a minimal impact on EUR/USD's dynamics, while the neutral-optimistic position of the ECB can provide substantial support to the single currency.

The most important macroeconomic reports for the pair will be published on Wednesday and Thursday. First, we find out data on the growth of US inflation, and then - the producer price index in the United States. In both cases, a minimal but still positive trend is expected. Thus, the consumer price index on a monthly basis should rise to 0.3% (from 0.2%), in annual terms - 1.8% (from 1.5%). The producer price index will also show slight growth - from 0.1% in February to 0.3% in March. You should also pay attention to the dynamics of Chinese inflation, since this indicator may indirectly affect both the dollar and the general mood of the market. Moreover, experts predict an impressive jump - from 1.5% in February to 2.4% in March. If this forecast is implemented, then Chinese inflation will return to highest values of last year.

Thus, EUR/USD traders should "fasten their seat belts" in anticipation of strong price turbulence. The task of bears of the pair is to pull down the price below 1.1160 (the bottom line of the Bollinger Bands indicator on the daily chart). In this case, they will open their way to the main support level of 1.1000. The task of EUR/USD bulls is to rise and gain a foothold above 1.1285 (the middle line of this indicator on the same timeframe). This dynamic will mark the priority of an upward movement.

The material has been provided by InstaForex Company - www.instaforex.com
EUR/USD: fasten your seat belts strong price turbulence is expected