The unfinished wave of the euro started on March 20th. In the bearish construction, the first parts (A + B=B) are completed, the zigzag of the final part (C) is formed. The price is at the upper limit of strong support.

Before the end of the middle part of the current wave, the price needs to work out a rebound upwards. The most probable site of the forthcoming rise is in the area of settlement resistance. Before the start of price growth today, a rebound in the price is not out of the question.

Sales of euros in the next day are high-risk. With intraday trading style, traders are advised to track reversal signals to search for entry into long positions. 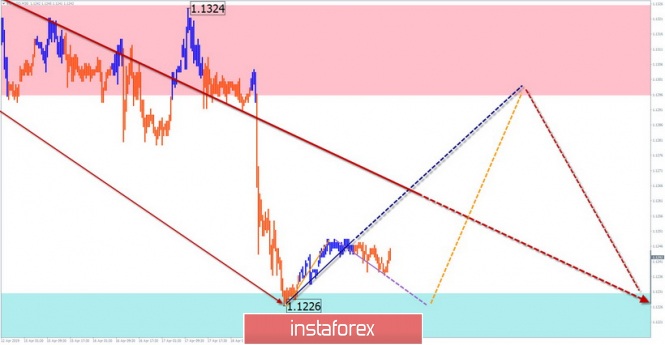 In the short term, on the British pound chart from March 13, a downward wave is developing. It has a pronounced correctional nature. At present, the first parts of the wave structure have been formed. Last week's price breakout gave rise to the final part.

Before an active price breakthrough, the price needs to work out an intermediate pullback. In the upcoming trading sessions, a flat mood of the pair's fluctuations between the nearest price zones is expected.

The upcoming price rise of the pound has a small potential for movement, so purchases are possible only on the smallest TF within the "scalping". Trading on a larger scale is recommended to refrain from entering the market of the pair and wait for the completion of the upcoming price rollback. 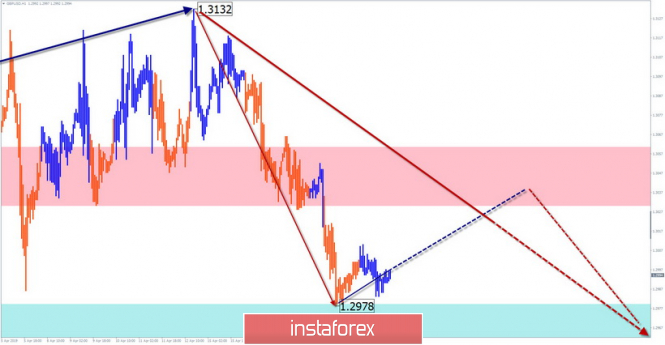 The last unfinished wave model "Aussie" is a bearish one of January 31st. The first part (A) is formed in the wave structure, from March 8 an upward correction is formed (B). Last week, the price reached the estimated milestone of completion. The structure of the bull wave looks completely finished, the proportions of all parts are observed. There are no reversal signals yet.

The decline that began on April 17 with a high probability can become a reversal structure before the change of the course of the interday trend. The price reached the support zone. In the coming sessions, an upward trend is expected, with a re-rise of quotations in the area of the resistance zone.

Within the framework of intra-session trading, the pair purchases will be relevant today, while it is more reasonable to reduce the lot. To open longer trades, it is recommended to refrain from entering the market and wait for confirming reversal signals. 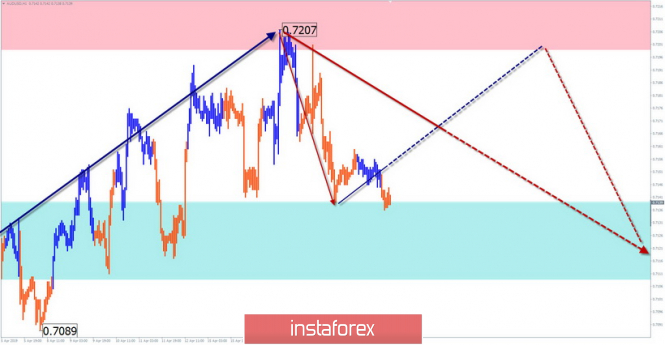 Explanations to the figures: Waves in the simplified wave analysis consist of 3 parts (A – B – C). The last unfinished wave is analyzed. Zones show areas with the highest probability of reversal. The arrows indicate the wave marking according to the method used by the author, the solid background is the formed structure, the dotted ones are the expected movements.

The material has been provided by InstaForex Company - www.instaforex.com
AUD/USD. Simplified wave analysis and forecast for April 22 EUR/USD GBP/USD