The direction of the intersessional trend of the euro fits into the bear wave algorithm of March 20. This section forms the correction of the first part of the upward wave of a larger scale, therefore the nature of price fluctuations is flat. The middle part (B) is completed.

The nature of the price movement may be similar to yesterday's day. Before the turn, you need to count on a short-term price increase, possibly with a puncture of the upper boundary of the resistance zone.

The potential for euro price growth has been exhausted, so purchases are very risky. Prior to the emergence of clear reversal signals, traders are not recommended to take action to enter the pair's market. 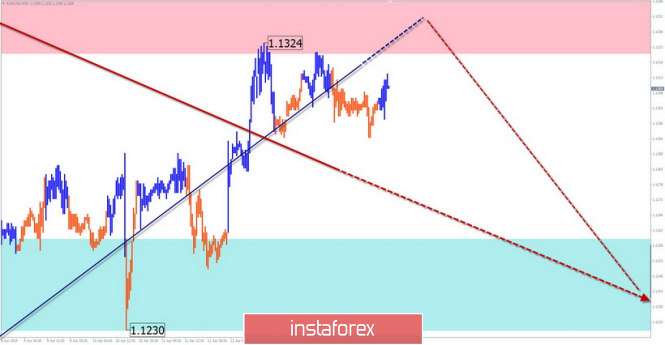 The price fluctuations of the pound in the last 3 weeks form a horizontal pennant, forming a correction in the bearish wave of March 13. The structure of the bullish movement seems to be finished. The price is at the bottom of the powerful zone of a potential reversal.

On the chart, all the conditions for completing the current flat and returning to the downward motion vector are fulfilled. It's probably a matter of days. Before the reversal, you can expect the price to rebound to the lower limit of the resistance zone.

In the area of calculated resistance, it is recommended to track the signals of your vehicle for the sale of a pair. The support zone will limit the daily volatility of the instrument. 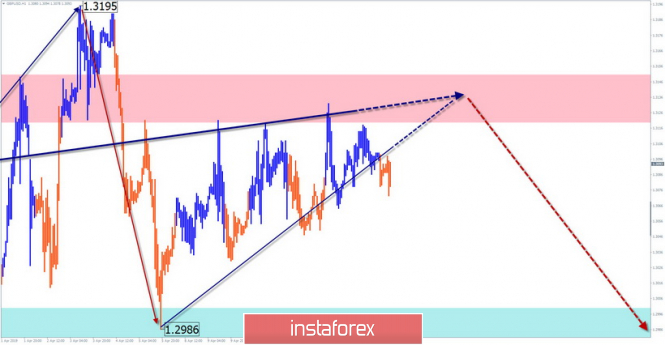 Starting from March 3, the price quotations of gold form a flat figure on the chart that most resembles a "standard plane". There is a high probability of truncation and the formation of a "pennant". The wave was fully formed the first part (A + B). Since April 4, the wave zigzag of the final part (C) has been developing.

The decline has reached the estimated end zone, but there are no signals of the rate change on the chart. There is a possibility of breaking the lower limit of the support zone.

Sales have exhausted their potential, so the next day will be irrelevant. It is not recommended to enter the market until the confirmation signals of the exchange rate appear. The main attention should be paid to the signals of buying the instrument. 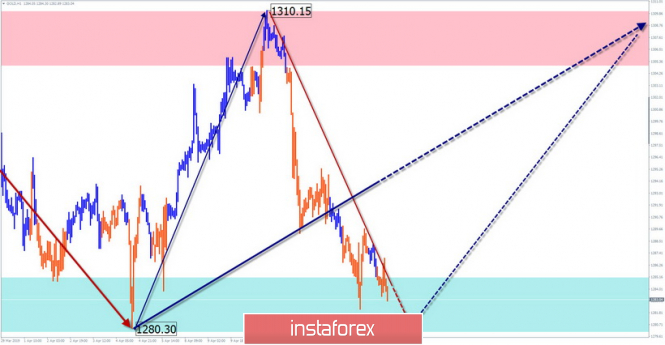 The material has been provided by InstaForex Company - www.instaforex.com
EUR/USD GBP/USD GOLD. Simplified wave analysis and forecast for April 16