The direction of price movement in recent weeks sets the unfinished structure of the bearish wave of March 20. The wave adjusts the trend plot in the larger models, so the movement has a flat character.

The price is within the framework of a potential large-scale reversal. The structure of the ascending section does not show completion. Before the change of the course, a repeated price rise is expected, a short-term puncture of the upper border of the resistance zone is not excluded.

Purchases carry a high degree of risk, even on small TF. It is recommended to refrain from trading transactions until clear reversal signals appear. Next, the sale of the pair will be promising. The support zone shows the lower limit of the expected daily volatility of the euro. 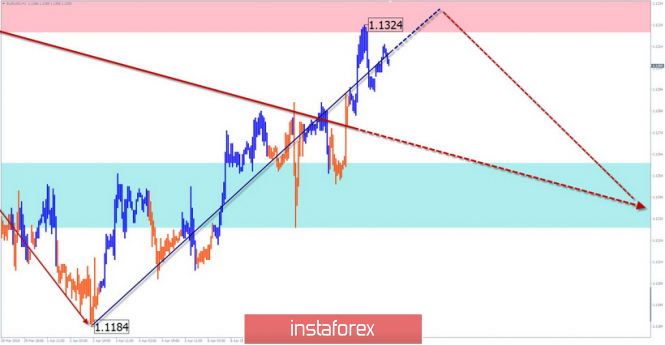 The unfinished short-term wave of the major of the British pound is counting from March 13. In recent weeks, the wave develops a flat correction, which has the form of a "downward pennant".

The flat price increase from April 5 is close to completion. Great chance to change the vector of international traffic already in the next sessions. The support zone indicates the expected lower limit of the daily variation of the pair.

When buying, "pipsing" is possible not further than the lower border of the resistance zone. As part of the intersessional trading style, it is recommended to track the signal selling the instrument. 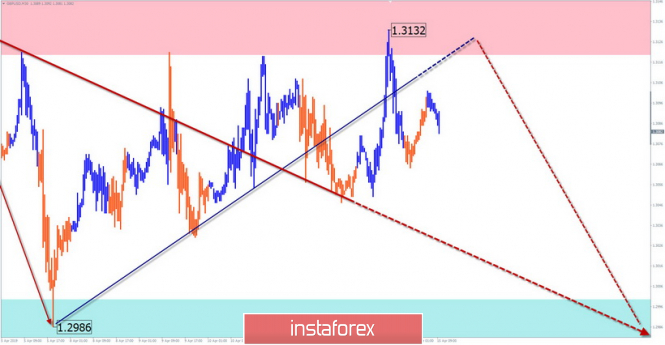 On the chart of the Japanese yen since March 25, an upward wave model is developing, which has a pronounced impulse form. The wave completes a large-scale wave structure that started earlier in the year.

From the zone of resistance achieved in the next session is expected to begin a price decline. The expected swing down is minimal, the character of the movement is likely to be flat. A repeated attempt to break up is more likely on the following day.

The upcoming decline goes against the main trend, so sales are possible only on the smallest TF, "scalping" in a small lot. In the area of calculated support, it is recommended to track reversal signals to search for entry into long positions. 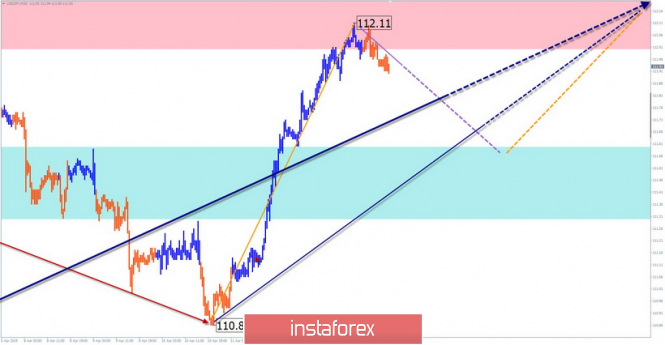 Explanations for the figures: Waves in the simplified wave analysis consist of 3 parts (A – B – C). The last incomplete wave is analyzed. The last unfinished wave is analyzed. Zones show areas with the highest probability of reversal. The arrows indicate the wave marking according to the method used by the author, the solid background is the formed structure, the dotted ones are the expected movements.

The material has been provided by InstaForex Company - www.instaforex.com
EUR/USD; GBP/USD; USD/JPY. Simplified wave analysis and forecast for April 15