The downward wave structure continues to form on the euro chart from March 20. The first 2 parts are formed in its structure. In the final part (C), an internal zigzag is formed.

Before the final breakthrough down the price, it is necessary to work out a counter rollback. The maximum calculated level of the rise is within the resistance zone.

Given that the upcoming price growth goes against the trend direction of the main wave, euro purchases are risky. At the same time, a sharp increase in volatility cannot be ruled out. In transactions, it is worth reducing the lot and operating with the smallest TF. Completion of the rollback will be a good starting point for opening short positions. 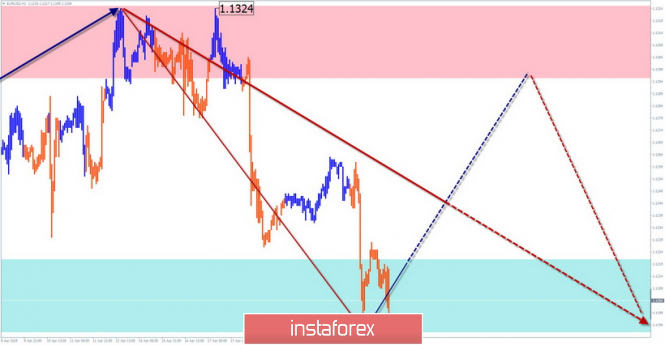 As seen on the chart of the pound, a complex bearish wave develops, which takes the place of correction in a larger wave formation. The final part is formed in the structure. The rollback phase yesterday was over.

Until the end of the week, the main vector of the price movement of the pound will be a downward move. On small TF quotes, the pair formed the first part of the upward rollback, the completion of which is worth waiting for in the upcoming sessions.

The upcoming rate rise is expected to be no further than the upper level of the resistance zone. Price fluctuations today can create very good conditions for the opening of transactions for the sale of the instrument. The active phase of the decline is possible at the end of the day or tomorrow. 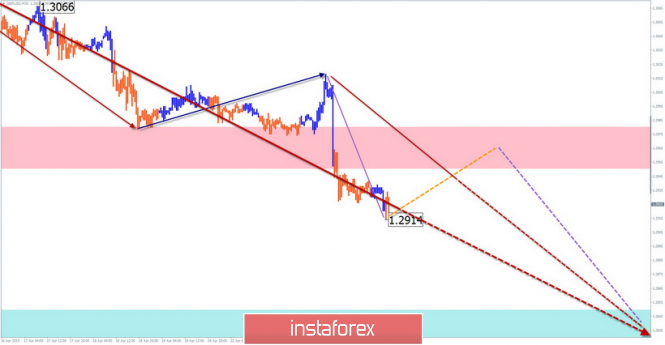 As seen on the chart of the yen, a bullish wave is formed with very high movement potential from March 35. For analysis and trading, its last section, dated April 10, is of interest. In the structure of this wave, the first 2 parts (A + B) are fully completed.

Since yesterday, a distinct reversal pattern has been formed on the chart of the pair, preceding the start of intensive price growth. A downward pullback is formed, which can stretch over the entire current day. Reversal and the beginning of growth are more likely tomorrow.

The pair's sales are irrelevant. In the area of settlement support, it is recommended to monitor the signals of instrument purchase generated on your vehicle. A sharp increase in volatility cannot be ruled out before a change of course. 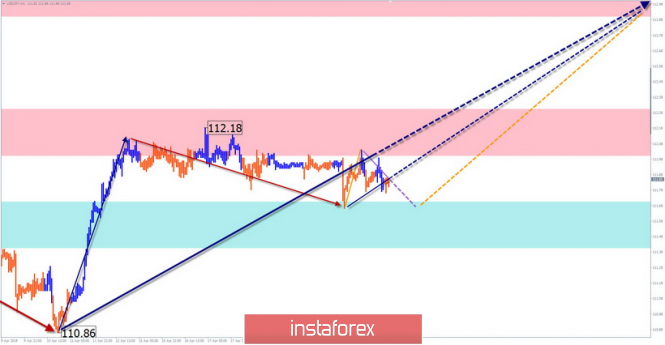 Explanations to the figures: Waves in the simplified wave analysis consist of 3 parts (A – B – C). The last unfinished wave is analyzed. Zones show areas with the highest probability of reversal. The arrows indicate the wave marking according to the method used by the author, the solid background is the formed structure, the dotted ones are the expected movements.

The material has been provided by InstaForex Company - www.instaforex.com
EUR/USD GBP/USD USD/JPY. Simplified wave analysis and forecast for April 24