EUR/USD: plan for the US session on April 12. Bulls managed to get above the key resistance of 1.1290

To open long positions on EURUSD, you need:

The data on industrial production in the eurozone turned out to be better than economists' forecasts, which allowed euro buyers to cope with the level of 1.1290, which I paid attention to in the morning review. At the moment, the upward trend is stopped in the resistance area of 1.1324, the breakthrough of which will increase the demand for EUR/USD and lead to an update of the highs in the area of 1.1358 and 1.1388, where I recommend fixing the profits. In the case of a downward correction of the euro in the second half of the day, you can take a closer look at long positions after the support test of 1.1295 or a rebound from a minimum of 1.1265.

To open short positions on EURUSD, you need:

Euro sellers are not in a hurry to return to the market from the resistance level of 1.1324, and the stop in growth is only due to profit taking on long positions. Only the formation of a false breakdown in this range in the second half of the day will allow us to count on a downward correction to the support area of 1.1295, the breakthrough of which will lead to a rapid decline in the euro to a minimum of 1.1265. In the scenario of further growth of EUR/USD, it is best to expect short positions to rebound from the maximum of 1.1358.

Trading is conducted above 30 and 50 moving averages, which indicates the resumption of the upward correction in euros.

In the case of a euro decline in the afternoon, support will be provided by the average Bollinger Bands indicator around 1.1275. 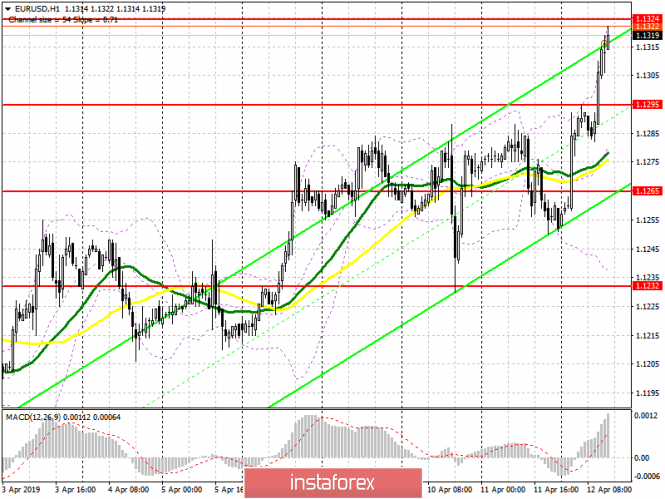 The material has been provided by InstaForex Company - www.instaforex.com
EUR/USD: plan for the US session on April 12. Bulls managed to get above the key resistance of 1.1290