On Monday, the euro was still able to go up from the consolidation range of 1.1184-1.1255 but was soon stopped by the resistance of the MACD line of the daily scale. At this moment, the signal line of the Marlin oscillator of the daily chart reached the border with the growth area (the zero line of the oscillator, the so-called border, is the support/resistance level), and a divergence formed on the four-hour scale. 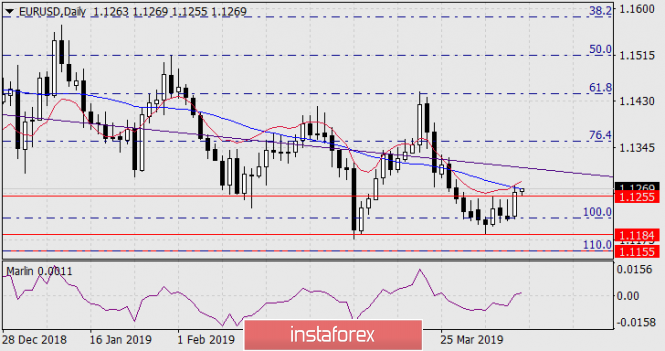 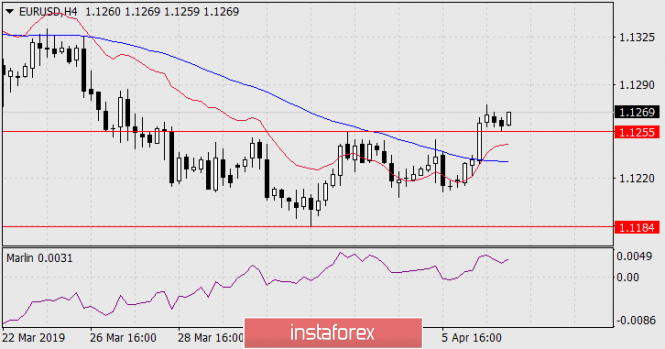 Now, we are waiting for the price reversal from the achieved resistances, its return under the MACD line of the four-hour scale and departure below the lower limit of the consolidation range of 1.1184-1.1255. Moreover, according to the media, the nervousness in the market arose from the expectations of the ECB's monetary policy adjustment regarding the introduction of multi-level rates. No one expects such a change at a meeting on Wednesday, but the fact of considering such a strategy by the Central Bank may not come from a good economic life, therefore, the euro's growth is extremely limited. There is no optimism from the expected macrostatistics: the forecast for retail sales in Italy for March is -0.2%, industrial production in France for February is expected to be -0.5%, Italy is also -0.5%, for the euro area as a whole (data released on Friday) -0.5%.

The material has been provided by InstaForex Company - www.instaforex.com
2019 Forecast for EUR / USD on April 9